No Mesut in the starting line-up. Could the team raise their performance without him after last week’s dismal showing in Stratford? You Betcha.

It was Blitzkrieg in that opening period of the game. The only disappointment was having only Laca’s wonderful strike to show for it.  We retreated a little just after the goal as if the team couldn’t quite believe it was actually winning in a first half. Pedro’s dink over the keeper was the only real moment of extreme danger, though.

We still had the better chances in the remainder of the first half including a bullet header from Kos straight at the keeper’s face. When almost exactly the same chance came again, Kos decided to use something he’d practised in training, a  no-look header (© fgg).  Fooling the Arrizabalaga that he was going to power a header again, he deftly deflected the ball off his shoulder, cushioning it into the far corner. The keeper stood as if he’d watched a magic trick. It gave us some vital breathing space before half time. 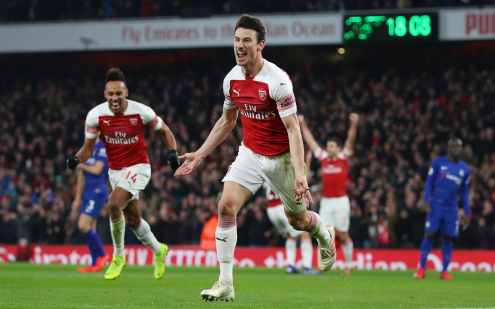 Chelsea huffed and puffed but failed to really get up a decent head of steam against Arsenal’s well-organised defensive structure.

Kos even took one in the orchestra stalls blocking a pile-driver. You can see the after effects here.

OG came on from the bench and got more respect in a few minutes than he ever did while playing for the Club.

A third goal looked possible on a couple of occasions but wasn’t to be.

A different team performance altogether from our recent away efforts. Everything worked perfectly on the day, so a time to bask in beating our West London rivals.

One shot on target from the chavs in the whole 90. Emery using Ramsey to cut the supply lines to Hazard was a masterstroke. A superb defensive tactical display from the Arsenal and a clean sheet to boot. Not often we say that.

Ratings (extra point for everyone for beating the chavs)

Koscielny – majestic in defence and cunningly brilliant for his goal … 9

Sokratis – shame he couldn’t find the net with his first half header, solid throughout …8

Torreira – still not sure if he knows 100% what his role in the side is but he worked really hard throughout, tiring a little in the second half … 8

Guendouzi – perpetual motion, which sometimes make him look like a schoolboy chasing the ball over the field, ten out of ten for youthful exuberance … 8

Ramsey – excellent in that first period where we could have run away with it – the pressure’s off for Aaron, so hopefully he can have a massive positive effect on the rest of our season … 8

Aubameyang – A couple of belting chances not snaffled up in the first half, though the bicycle kick was unlucky … 7

Maitland-Niles – a couple of really important challenges – with Hector out, it’s time for him to push on … 8

ElNeny – tidy, and helped in the second half rearguard display … 7

Additionally we have an FGG assessment of yesterday……..

Without a doubt, my favourite performance of the season.

Obviously we all enjoyed the Spurs game at home, but we’ve just beaten Chelsea without our goalkeeper making a single significant save. Tactically we were absolutely outstanding and you could see that Emery had looked at the opposition and had decided that stopping Jorginho was the way to stop that team hurting us. Ramsey dominated him for 60 minutes and then Elneny came on and stood next to him for the last half hour. We allowed them space out wide knowing that they could couldn’t hurt us with crosses, and the performances of our CB’s was a joy to watch. If we had more players who cared about the job they do as Sokratis then we would win the league. He may not be the best player, but he was absolutely immense today and you can see he cares about defending. We haven’t had a player like that for a while. Everything the Greek lacks in technical ability though, the guy stood next to him absolutely makes up for it. Koscielny oozed class and gave a defensive masterclass in positioning and guile. What a performance.

I’m not going to pretend this makes up for the last few performances, but I can see that with the right players, Emery has the tactical nous to take us forward. We just need the right players to implement what he’s asking.

Absolutely loved that 2nd half and watching the last 15 minutes knowing that Chelsea had zero chance of scoring was a rare treat. Let’s hope it continues.

Interesting to listen to Keown’s comments after the game. He seems really frustrated that Ramsey played so well today but won’t be with the team moving forward. I’ve also seen a lot of comments from Merson recently about Arsenal letting players go on the cheap. Whilst we all agree that certain things have been awful behind the scenes, I don’t understand the total negativity that comes from these people.

Personally, I believe that getting rid of players like Ramsey and Özil will see the club move forward. Emery has his own ideas about the squad and if he believes that the £350k we pay Özil and the probable £200k+ we would’ve had to pay Ramsey can result in us signing 2 or 3 players then I’m with him. Don’t get me wrong, the club could’ve handled the contract situations of Wilshere, Ox, Ramsey, Özil and Sanchez so much better than they have, but in reality, I look at that list of players and wonder how many of them really would be moving our club forward right now. Four of them have been out injured for the last month ffs, how often was that a problem for Wenger’s teams!?

This entry was posted on Sunday, January 20th, 2019 at 7:27 am and is filed under Uncategorized. You can follow any responses to this entry through the RSS 2.0 feed. You can leave a response, or trackback from your own site.

33 Responses to Back in Business – Arsenal v Chelsea Ratings