Arsenal FC – Our away record against the Seagulls

Brighton and Hove are twin towns, now combined as one city, on the South Coast of England in the county of Sussex, and are well known as tourist destinations.

Professional football in the area was the brainchild of Edgar Everest, a Sussex Football Association official who founded Brighton United in 1897. Playing at the Sussex County Cricket Ground, the club collapsed in 1900. A high-class amateur side, Brighton & Hove Rangers, was formed in its wake but also folded after just one year. 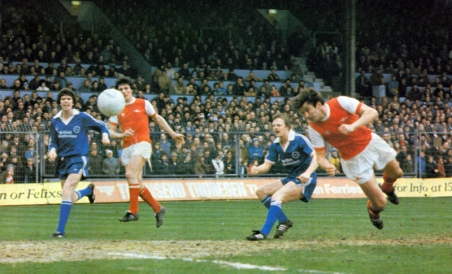 But the will to provide the towns with a successful club was already strong. The former manager of Brighton United, John Jackson, was the driving-force behind a third club.

Brighton & Hove Albion F.C. were founded in 1901 and 19 years later, in 1920, they were elected to the Football League’s new Third Division – having previously been members of the Southern League.

Our first game against Brighton was in the third round proper of the FA Cup played on January 12th 1935 at the Goldstone Ground in Hove and it ended in a 0-2 win for Arsenal.

In league play we have only met Brighton on ten occasions, eight in Division 1 and two in the EPL.

Here is our complete league away record – 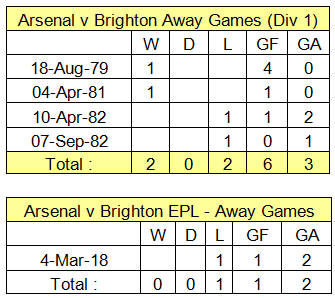 Treat it like a cup tie – our recent record at the Amex (or whatever mercenary, corporate name it has now) is good in the FA Cup.

This entry was posted on Monday, December 24th, 2018 at 6:52 am and is filed under Uncategorized. You can follow any responses to this entry through the RSS 2.0 feed. You can leave a response, or trackback from your own site.

88 Responses to Arsenal FC – Our away record against the Seagulls