Arsenal FC – Our record playing in the Ukraine

Our record in the Ukraine hasn’t been all that auspicious.  It’s a difficult place to go as winter creeps in.

Dynamo Kyiv were our first Ukrainian opponents in 1998. These were the days of playing at Wembley to allow more people in and swell the coffers that bit more. It was a dreadful idea as virtually all home advantage was lost. Kiev (as we called them in those days) had Shevchenko and Rebrov, which also didn’t help! We drew at home and then lost 3-1 away in November. (This was before Rebrov disgraced himself by going to the spuds, coming 12th and 9th before going on loan to Fenerbahce). 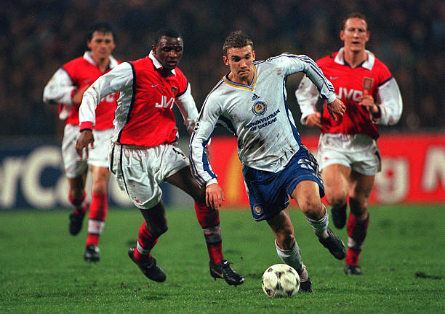 In 2003 we again lost away but sneaked a 1-0 home win at Highbury with a late Ashley Cole goal. Kiev were drawn in our group for the third time in 2008. We managed to sneak a 1-1 draw in the Valery Lobanovskiy Stadium thanks to a very late Billy G equaliser and sneaked the home tie when Lord Bendtner popped up with an 87th minute winner. 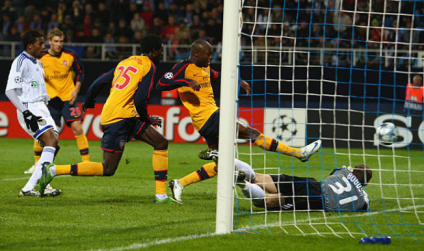 Against Shakhtar Donetsk in September 2000 at Highbury, I was proud to witness one of my favourite ever live games. Losing 2-0 early on, Wiltord gave us hope on the stroke of half time slotting in the rebound from a missed penalty. The last ten minutes will live long in the memory as Martin Keown popped up with two goals (one which appeared to be off his arm) to snatch victory at the death. Must have been his only brace ever. I smiled all the way home to Notts. The less said about the 3-0 away defeat in November the better.

We romped past Shakhtar in October 2010 5-1 at the Emirates featuring goals from the FFBW, a Cesc penalty and a Chamakh special before again losing away 2-1 in November. (Eduardo, our Brazilian Croatian ex-player, scored in both legs but shunned any goal celebrations) 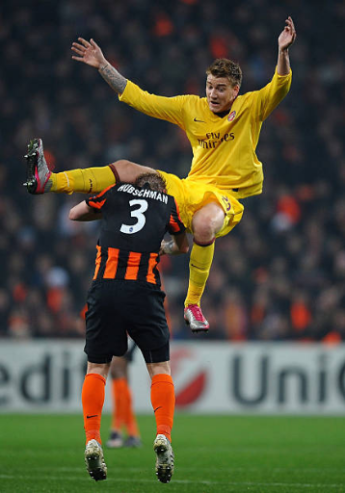 There’s a theme developing here. The later in the year you play away in the Ukraine, the harder it is to come away with a point. A proliferation of gloves and too many thermal layers probably doesn’t help.

Still all trends are there to be broken, starting on Thursday.

Russian aggression towards the Ukraine appears to be escalating and in response the Ukrainian government has declared martial law. President Petro Poroshenko has said the implementation ‘aims to prevent an all-out Russian invasion’.

A statement from Uefa read: “The emergency panel has today taken the decision to relocate FC Vorskla’s Europa League group stage match against Arsenal from the city of Poltava, following the introduction of martial law into certain regions in Ukraine.

“Uefa will continue to monitor and assess the security situation in Ukraine in the coming days before making any decision on potentially relocating other matches.”

Up to 500 Arsenal fans were expected to travel to the game in Poltava and now must make alternative arrangements, with the decision coming less than 48 hours before the scheduled start time, which remains unchanged. (17:55pm)

This entry was posted on Wednesday, November 28th, 2018 at 7:01 am and is filed under Uncategorized. You can follow any responses to this entry through the RSS 2.0 feed. You can leave a response, or trackback from your own site.

22 Responses to Arsenal FC – Our record playing in the Ukraine