Arsenal F.C. – Our away record against the Cherries

A.F.C. Bournemouth was formed in 1890 as Boscombe St. John’s Institute F.C., they adopted their current name in 1972. Nicknamed The Cherries they have played their home games at Dean Court since 1910. Their home colours are red and black striped shirts, with black shorts and socks.

They have spent the majority of their history bouncing between the third and fourth tier of English football. Under manager Eddie Howe, they have risen through the leagues; 2015-16 being their first ever in England’s top division.

Their most famous victory was over holders Manchester United in the FA Cup in January 1984, while they were managed by Harry Redknapp.

We have only played the Cherries on seven occasions the first being a league Cup game on October 27th 1987 which we won 3-0. Since their arrival in the Premier League we have met them six times with an overall record of W4, D1, L1, GF14, GA6. 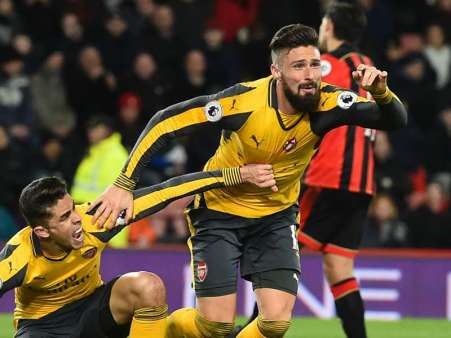 Our away record had been spotty and we lost the last game against them at Dean Court and have not won there since 2016.

This entry was posted on Saturday, November 24th, 2018 at 7:15 am and is filed under Uncategorized. You can follow any responses to this entry through the RSS 2.0 feed. You can leave a response, or trackback from your own site.

29 Responses to Arsenal F.C. – Our away record against the Cherries