September 24th 1904 was the date we played our first game against Wolves and also the day we scored our first ever top flight goal.

Charlie Satterthwaite holds the honour of scoring Arsenal’s first goal in the First Division. The striker had a keen eye for goal during his six-year spell with the Club and scored 48 times in 141 appearances. Satterthwaite opened the scoring on that day in 1904 in a 2-0 victory over Wolves – both Arsenal’s first goal and also first victory of their maiden campaign in the top flight of English football. He had joined five months earlier from West Ham and made his debut on the opening day of the 1904/05 campaign in a 3-0 loss to Newcastle. Satterthwaite finished as the team’s top goalscorer that year and also in 1906/07 (with 19 goals) before retiring in 1910 at the age of 33. His younger brother Joe also played for Arsenal, which made them the first siblings to achieve the feat.

The following is an extract from the book Fighting for Football: From Woolwich Arsenal to the Western Front by George Myerson. 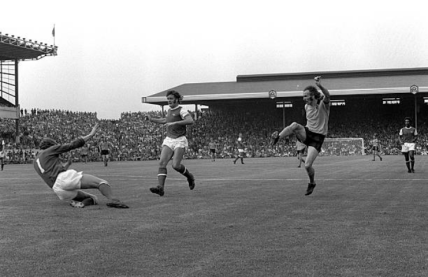 This entry was posted on Saturday, November 10th, 2018 at 6:12 am and is filed under Uncategorized. You can follow any responses to this entry through the RSS 2.0 feed. You can leave a response, or trackback from your own site.

20 Responses to Arsenal FC – Our home record against Wolves