Was Leno at Fault for Liverpool’s Goal?

Following on from a thread about  whether Leno was at fault for the Liverpool goal, this is taken from a comment by our resident Keeper, GIE:

Now on to the goal plus Leno’s general command of the box and I am not so impressed. That said, I think Cech is also not the greatest in this area and we have seen examples on several occasions (one being his debut). Always thought at Chelsea he was well protected by Terry and co in front of him and could stay on his goal line. So yes, Leno is currently our no 1 but I do think he needs to improve that area of his game and he can, given time.

What would I liked to have seen different on their goal?  Well you only have to watch their keeper in a similar situation in the first half. A similar cross, a similar dive except he fisted it away therefore adding power and it came at Mikhi really quickly, meaning he needed to kill it dead, which he didn’t, and the chance was gone. Compare that to the nicely settled ball Milner had to strike.

This was because Leno tried to catch it, which was not necessarily the worse decision if it had stuck, but I would rather see him either adjust his hands and flick the ball up over onrushing defenders and attackers without deviating the ball’s path or use two strong fists to punch away at speed. What happened was probably a result of indecision; all keeping errors in cross situations are nearly always a result of that. So he needs to work on decision making and he will be fine.

And decisions need to be made later even when the ball is in flight. Now I know I didn’t play at this level but whatever level you play at, you should have the necessary skill/mental capacity to achieve the same result against players of equivalent standard. (One team I used to play against (Haringey Boro) are in the first round of FA Cup this week, they’ve gone up a couple of leagues since I played them).

Take a free kick situation (like the one that led to Van Ducks header) and a high line (I was fond of that too as it gave me the 18 yard box unimpeded). If they put the ball between penalty spot and goal line and in centre of goal, I was coming for it, anywhere else it was the defenders’ and attackers’. Not many players were going to beat me with a header from further out. The only time I’d have to worry about bodies around me is if they floated it up high but even then I’ve got height advantage with arms so as long as I watched the flight and attacked at the highest point it was never going to be an issue. 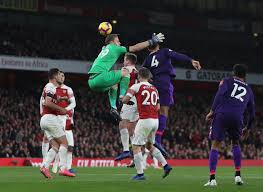 Corners are trickier balls that can be whipped in flatter and therefore take height advantage out of the equation. That said, I think as a team we need to change it slightly: if they put a man on the keeper you have to leave him on his own – we tend to put a second man in there, so not only is Leno blocked by one attacker he is also impeded by a defender too. If the opposition, as Watford do, put a second player on the keeper and the defence does likewise,  the GK now has two attackers and two defenders to navigate around.

My view was if they put a man on me, tell the defender to F off and make sure one of the men on the posts pick him up in second phase (if necessary) then I could ignore him, play my normal game. If he blocked my run to the ball, it was easy for officials to see the foul. Also if I ignored him, he wasn’t in my mind when I went to attack ball

written by Gooner In Exile

This entry was posted on Wednesday, November 7th, 2018 at 9:35 am and is filed under Uncategorized. You can follow any responses to this entry through the RSS 2.0 feed. You can leave a response, or trackback from your own site.

21 Responses to Was Leno at Fault for Liverpool’s Goal?