Wow, that was a hell of a half time talk! – Leicester ratings

We were so poor in the first 30 minutes I was starting to wonder why I’d made the trip down from Notts. By the end of the second half I was ecstatic and delighted to clap my team off the pitch.

Occasionally under Arsene it seemed as though a half time doobie had been partaken of, because of the sluggish way we came out for the second period. Under Unai it’s the complete opposite. (Mind you, Mesut’s deliberate cannon off the post just before half time must have given the boys a shot in the arm, as well.) 🙂

Leicester looked a yard faster and fillet steak with pepper sauce hungrier at the start of the game. Arsenal’s front 4 may as well not have been on the pitch. All of the micro-management directions on how to play Leicester either hadn’t been given or were completely ignored. Free kicks were given away in the final third (partly down to an appalling display from the ref), possession was conceded in our own half playing to their counter-attacking strengths and a lethargic work rate all contributed to the feeling that it was only a matter of time.

Bernd made a superb save from the unicorn rider before being finally beaten by a spawny deflection. One nil down and fully deserved. Finally we woke up and seemed to realise that another gear would have to be found. Wobbly cracked in a fine drive after good build up play which turned out to be the aubergine mezes before the superb Mesut inspired lamb tagine. Micki getting dragged over just as Hector returned Ozil’s pass seemed to distract the blue defence and our Mesut’s guiding of the ball sidefooted off the cushion has never been executed by Ronnie O’Sullivan with greater aplomb. Back in it right on the stroke of half time. Perfect.

The second half could not have been more different to the first. Leicester went from looking threatening to looking terrified with a red tsunami bearing down upon the North Bank goal.

Iwobi suddenly began to live up to his recent rave reviews. Mesut’s speed of thought overtook and then completely buried Leicester’s willingness to run their arses off. The substitutions were just sublime – like attaching a jet engine to a Golf GTI. 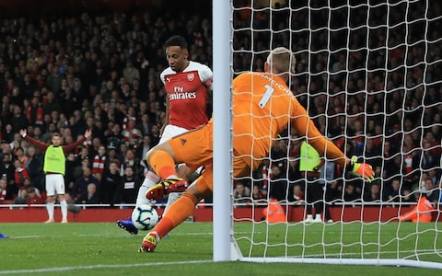 Goals two and three were just magical. As Micky said, words are a bit pointless. Rat tat tat, bish bash bosh. Mesut’s pass to Hector for the second, Terrier’s driven pass forward, Mesut’s dummy before Laca’s perfect lay off back for number three were all gems in the middle of such lush gorgeousness. Glorious team play a certain Frenchman would have been purring over. Just perfect. You could see in the celebrations of the players how much they realised they’d created a nigh on perfect team goal. We might have a few contenders in goal of the season at this rate.

Ratings (mostly second half apart from the keeper, but who cares?)

Hector – absolutely superb in the second half – two assists…8

Mustafi – pretty damn fine, especially with some intelligent covering in the second half…8

Lichtsteiner – out of position on the left and it showed…6

Torreira – like the central cog of a timepiece we’ve been missing for so long. Thank Dennis the nasty challenge from Albrighton didn’t cause more damage…9

Xhaka – was better at left back than Stephan…8

Ozil – a goal, an assist and a pre-assist – damaging the opposition where it hurts, what a feckin player…10

Iwobi – looked class in the second half, protecting the ball in possession and always looking for a dangerous pass…8

Laca – appeared somewhat miffed when Auba emerged from the bench for two tap-ins and then proceeded to fluff two glorious chances of his own. His work rate was magnificent throughout and his contribution to the win not to be underestimated…8

Guendouzi – showed his full range of passing in his half hour on the pitch. Instrumental in the shift up to warp factor ten…9

This entry was posted on Tuesday, October 23rd, 2018 at 7:12 am and is filed under Uncategorized. You can follow any responses to this entry through the RSS 2.0 feed. You can leave a response, or trackback from your own site.

98 Responses to Wow, that was a hell of a half time talk! – Leicester ratings