Arsenal FC – Our record against the Foxes

Our first home game against Leicester City (or Leicester Fosse as they were called then) was on March 9th 1895 and ended in a 3-3 draw.  It was played at Lyttleton cricket ground in Leyton as the Manor Ground was under a 6 weeks suspension due to an incident in a fractious match against Burton Wanderers; the referee had been knocked clean out at the final whistle by an angry Woolwich Arsenal supporter.

Our last home loss was on September 8th 1973 (45 years ago) overall we have only lost 6.5% of our home games and have never lost to the Foxes in the EPL era. 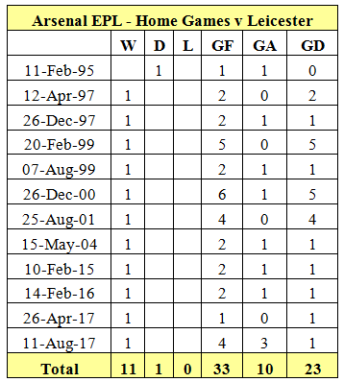 Going behind in the first half to a Paul Dickov header, a penalty and a delicious goal from a Dennis/Patrick combination completed both the comeback and the Invincibles season.

Having come on as an 83rd minute substitute, Danny Welbeck scored a 95th minute winner against the soon-to-be surprise champions. It was all the sweeter as Leicester had gone in front after Jamie Vardy had dived in ridiculous fashion to win a penalty just before half time.

The season kicked off in harum-scarum fashion with a Friday night rollercoaster ride. Having been in front after 2 minutes with Laca’s debut Prem goal, Arsenal went behind on the half hour. Sneaking level just before halftime, the Gunners again went behind before two late goals from substitutes Rambo and FFS Giroud sealed a dramatic victory.

It’s hard to not predict yet another home win on Monday, but you never know.

This entry was posted on Sunday, October 21st, 2018 at 7:48 am and is filed under Uncategorized. You can follow any responses to this entry through the RSS 2.0 feed. Both comments and pings are currently closed.

40 Responses to Arsenal FC – Our record against the Foxes