Wow, it really is an exciting time to be an Arsenal supporter. With the toxic infighting of last season fading from memory and now, incredibly, nine wins on the bounce it rightly has to be said that the Unai Emery revolution is gathering pace. I can’t remember the last time I found myself looking forward to the next game with such eagerness: you just don’t know what you are going to get.

We continued to make mistakes at the back in the early part of yesterday’s game and I can’t be the only one who feels that a better team is going to punish us to the tune of three quick goals giving us a mountain to climb to get back on level terms; but, on the other hand, there are now elements of our play that suggest that not only could we get top four – we could win the league. More level-headed and certainly more annoying sourpusses will probably say that the truth is somewhere in between.

My take on what turned out to be the thrashing of Fulham was that it was a workman-like performance studded with five incredibly good goals. Our football in general wasn’t that convincing but our goals certainly were. I could go through all of them, describing each in turn but wouldn’t be able to do justice to the fine collection.

Probably the most important was Lacazette’s second; it came at a crucial time, shortly after the restart and dampened down the enthusiasm that Fulham had worked up having scored just before the break. Back in charge Arsenal went on to slowly strangle the life out of the home side and add another three important points to our growing tally.

Yes, we have to continue to fend off accusations that we have not played anyone of note during this run but as dull as the saying goes that you can only beat who is in front of you, we still have had to do it and I for one did not expect us to do it so well as we have and be in this excellent position – especially in the wake of the first two games. Still, I am happy and pleasantly surprised to write that things really are looking good. 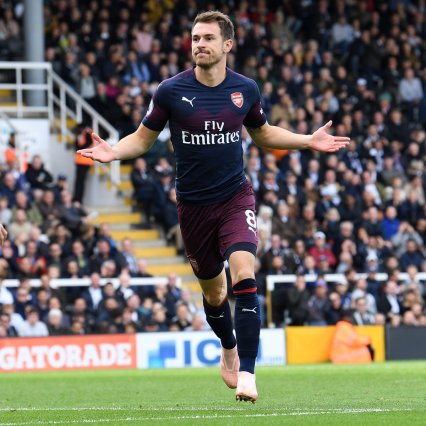 Leno: looking more confident and I have to say, commanding; I don’t think he could have done any more to stop Fulham’s goal. 7

Bellerin: excellent game, early criticism of his gallivanting down the wing, leaving us exposed at the back is now seen as unfounded as all have noticed that he was acting on instructions and he was not being covered as he is now successfully by Torriera. Hector looked the DB’s. 8

Mustafi: I think it was Fred who said that Shkod seems to be playing better with Holding rather than with Sokratis, this may be true; he did look a little more secure yesterday. 7

Holding: Well, who would have expected him at the start of the season to be in a position to stake a claim to an automatic place in the starting line-up? Not I, but he has. He really is improving his ability of playing the ball out from the back. Pretty much, always in the right place at the right time yesterday. 8

Monreal: everything was going down our left in the first half with he and Iwobi dominating proceedings, all marred by a really annoying bad pass that led to the Fulham goal. 6

Torreira: yep, the image of the Duracell Bunny works for me. Lacazette maybe most people’s man of the match for his goals but that is what I would argue he was supposed to do in the same way as a goalkeeper is supposed to save shots and just because Leno made some fine save does not make him man of the match. Now Torriera on the other hand controlled the game from start to finish and that is why he gets my man of the match. 9

Xhaka: Captain Granit, I know he is flavour of the month and he has been spraying the ball around well recently but he is still guilty of early lapses in concentration that seem to cause heart stopping nightmares early on in the game. We won 1-5 so I don’t want to get too moany. 6

Iwobi: confidence soaring, decision making improving, goal assists coming, what is not to like? Emery still took him off early and you could see the disappointment in his face, the aim was clear and it worked: don’t rest on your laurels Alex, more is still expected. The difference this season to last is that most people now expect him to successfully rise to the challenge. 8

Lacazette: two top goals, tons of hard work, swagger in his play. More excellent man management; he was left out of the team earlier in the season and has risen to the challenge of getting back into the starting eleven. 9

Welbeck: a fans’ favourite, everyone wants him to do well but he has two strikers around him who are at the top of their game and as such Danny is being shown to be the slightly inferior striker that he is. 6

Mkhitaryan: probably the thing he was guilty of was not scoring, that’s not to say that he had the chances it’s just that as those around him were scoring for fun and he was made to look human. I don’t think he had a bad game it’s just that he didn’t have a stellar game as some around him did. 7

Ramsey: well if that doesn’t win goal of the season then the one that does is going to be very, very special indeed. I have a lot more to say about Aaron but I will save it for another time. 8

Aubameyang: treat em mean to keep em keen. Raring to go as soon as he came on and gave a master class in finishing. 8

Guendouzi: superb cameo, ok the game was won but he offered so much to the midfield. 7

PS. If Ozil had played we would have won 1-8

This entry was posted on Monday, October 8th, 2018 at 6:02 am and is filed under Uncategorized. You can follow any responses to this entry through the RSS 2.0 feed. You can leave a response, or trackback from your own site.