Two goals from Danny in the first half had Arsenal cruising as the interval approached. His first came from a Matteo Guendouzi pinpoint cross after a short corner. The many Arsenal runs in the box confused Brentford who forgot to mark the only player who stood still; but what a fine header it was from Welbz. 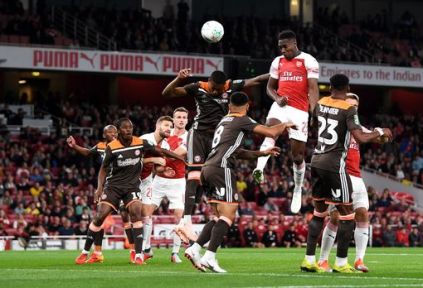 The second goal was warmly applauded by Mr Emery as it probably encapsulated all he wants from his players on the break. Brentford were pressing high, eventually the ball came to Lichtsteiner in a 50:50 challenge – no contest, Micki slipped the ball inside his marker freeing Iwobi on the burst. The Nigerian cockney used his mirrors to perfectly judge the run of Monreal steaming up behind him. A perfect perpendicular pass to the waiting Mancunian and it was two nil. 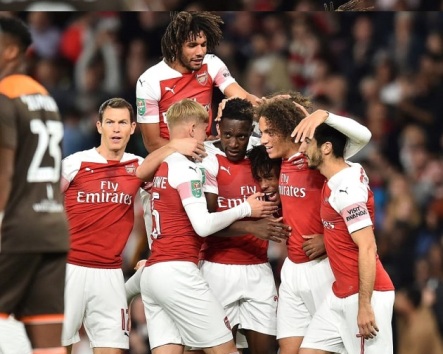 Arsenal quickly lulled themselves into a false sense of security in the opening few minutes of the second period. Emile Smith Rowe had a couple of decent positions which came to nothing; his usual youthful confidence giving way to indecision or a bad choice. Brentford fought for their hive like workers not drones and started to create some chances.

Their free kick to pull the game back to 2-1 was excellent but resulted from Guendouzi giving away a nonsensical free kick in a dangerous position. Suddenly the commentator was interested – he started to think he might see what he was hoping for after all.

Lacazette came on for ESR and proceeded to stink the place out with a complacent attitude and poor use of the ball. His touch was off even when slipped through by Guendouzi in prime real estate territory. Another sub was required.

Enter Lucas Torreira, avenger of evil and possessor of large hairy feet capable of mopping up in front of the back four. Things started to settle and the final quarter of the game left the commentator a little bereft of excitement and lacking in hope that all his dreams of a Brentford comeback would still come true.

Lacazette finally showed some class as he stroked home the third in the dying moments and it was through to the next round we go.

Unai Emery’s first League Cup team was a strong one and in the final reckoning, it needed to be.

Leno – not ready to displace the helmet as yet but steady and secure after an early blip….6

Lichtsteiner – struggled just a touch with the pace of his youthful winger but used his enormous experience to redress the balance….6

Mustafi – only one really comical moment giving the ball away and then falling over. Just the one hair-raising moment is quite good for him….6

Holding – don’t remember much that he did good or bad. Is that good or bad?….6

Monreal – Nacho is a real 100 percenter and was justly rewarded with an excellent slide rule assist. It’s a good job the Beast is back to share some of his workload….7

Elneny – he stood out for me simply because he did almost nothing of note apart from run around like a headless chicken. A DM he is not….5

Guendouzi – the odd sloppy pass but 95% of his work was rapid, incisive and clever. Was fouled quite nastily by Yennaris which Dean overlooked completely….8

Mkhitaryan – Henrikh played very well when we were on top but sometimes appears to lack the cojones for a scrap. Excellent use of the ball in the build up to the second goal….7

Iwobi – Another fine performance from Alex….7

Smith Rowe – Playing a little further forward seemed detrimental to Emile’s play though he showed some bright moments in the first period. He seems better coming from deep to me….6

Welbeck – two great goals which effectively won the game – is Brentford his level? – I sincerely hope not….8

Lacazette – one awful moment after another until his opportunist’s goal late on….5

Torreira – steadied the ship according to LB….7

Ramsey – didn’t really add much more than the player he replaced, Elneny….6

Mike Dean – just as bad as we all know he can be – fat, old and incompetent….3

This entry was posted on Thursday, September 27th, 2018 at 7:22 am and is filed under Uncategorized. You can follow any responses to this entry through the RSS 2.0 feed. You can leave a response, or trackback from your own site.