Let’s get stuck into the Toffees

First off a tribute to Everton’s Dixie Dean the holder of the all time English top flight scoring record.

When George Camsell scored 59 Football League goals for Middlesbrough in 1926/27 he must have believed that his record would last for years. It lasted just one season being bettered by William Ralph Dean – Dixie Dean. Not that it was easy, with two matches remaining he needed seven goals to beat the record. Four of them came against Burnley in the penultimate match and on Saturday 5th May 1927, 48,715 Everton fans were at Goodison to welcome the newly-crowned League champions and to see Dean get a hat-trick to take the record from Camsell. Arsenal opened the scoring after two minutes – Dean equalised a minute later. In the 6th minute Dean was fouled in the box and converted the penalty. The record equalled and plenty of time to beat it but it wasn’t until 8 minutes from the end when Alec Troup sent in a corner for Dean to head home the record-breaking 60th goal. (It should be noted that this was achieved in a 42 game season)

Dixie Dean remained at Goodison until the 1937/38 season having scored an amazing 349 goals in 399 League appearances. He died on 1st March 1980 at Goodison while attending Everton’s match against Liverpool.

Here are some more memorable moments in our games against Everton.

Rooney’s first league goal was certainly one to remember. The spectacular long-range strike ended Arsenal’s 30-game unbeaten run in the league and confirmed the 16-year-old was one for the future.

The Gunners picked up their first Premier League trophy after demolishing Everton with two games to spare. A Slaven Bilic own goal got the ball rolling for Arsenal, and after a Marc Overmars double, captain Adams smashed home the fourth in emphatic style. The game and league title was already secured when Adams raced forward in the 89th minute, but it was a seminal moment for the club captain in front of the Highbury faithful.

Everton’s first and only Premier League win at Arsenal came more than 22 years ago. Ian Wright had set the Gunners on their way to victory, but Graham Stuart levelled matters before Andrei Kanchelskis netted an 83rd-minute winner.

Dennis Bergkamp put on a magical display as the Gunners demolished Everton. The Dutchman assisted the first two for Robert Pires and Robin van Persie, while he got on the scoresheet himself with Arsenal’s sixth. It remains their biggest Premier League victory to date, having matched that scoreline one year later against Middlesbrough.

Van Persie is no stranger to scoring spectacular volleys. Efforts against Charlton Athletic, Liverpool and Aston Villa (the latter for Man Utd) come to mind, while this first-time strike against the Toffees sealed all three points for the Gunners following Alex Song’s delightful ball over the top.

One of the more bizarre moments in the Premier League’s history occurred when an angry Everton fan ran onto the Highbury pitch and offered his shirt in exchange for Alex Nyarko’s royal blue jersey. Nyarko asked to be substituted immediately and went on to quit football, though the midfielder reversed his decision a few days later and joined Monaco on loan.

Everton are one of only 6 clubs who have remained in the Premier League since its inception in 1992/93 – the others being Arsenal, Chelsea, Liverpool, Manchester United and Tottenham.

After losing our opening 2 games of the season we have now won 4 on the trot, 3 EPL and 1 Europa League. Overall we scored an average of 2.33 goals per game, however our defence still leaves a lot to be desired as we have not kept a clean sheet this season and our goals against average is a poor 1.83.

Our EPL home record against Everton is very positive; in fact (without checking) it may be our best against any EPL club. Only staunch Everton supporters would put money on Arsenal getting anything other than 3 points on Sunday. 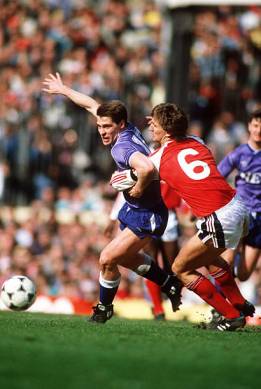 It would appear that Lucas Torreira and Henrikh Mkhitaryan are both doubts for the match. 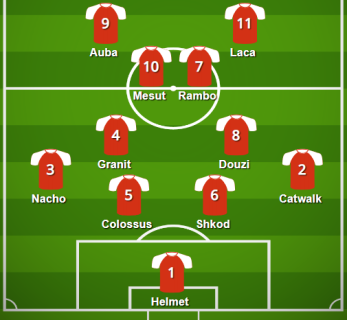 This entry was posted on Sunday, September 23rd, 2018 at 6:58 am and is filed under Uncategorized. You can follow any responses to this entry through the RSS 2.0 feed. Both comments and pings are currently closed.

66 Responses to Let’s get stuck into the Toffees