Playing the ball out from the back – Progress Report

What on earth is going on with Emery?

We are a Harry Arter miss away from being the laughing stock of the Premier League. If the Cardiff player had scored from the gift that Cech presented him early in the weekend’s game, the Arsenal Blogsphere would have gone into melt down. The number of visits to this site and every other would have gone through the roof because that is what happens when we lose – every single Arsenal moaner comes out of the woodwork. As it happens, Arter missed and we won so as very close as we came to being the laughing stock, we are not and traffic in Blogsphere is very light; that’s to say, it is just me writing this and you reading it.

So what is Emery trying to achieve giving seemingly suicidal instructions to play it out from the back in the way he is? I have ventured the idea that the purpose is to draw the opposition forward with the aim of being able to pass the ball past them in the hope of releasing our forwards with more space to work in and therefore a greater chance of scoring?

It can hardly be said that the tactic is working smoothly as it often resembles something from a Keystone Kop movie but ironically one of the by-products is that the opposition are drawn even further forward in the hope of exploiting our errors and this in turn frees up even more space for our strikers.

This understandably drew humorous comments suggesting that if things continue like this the whole of the opposition will be camped just outside our eighteen yard line and all Cech will have to do is to chip the ball over them to give one of our attackers a free run on goal.

Chas raised the more serious question of: weren’t we playing out from the back last season? The answer to which in my view is, err, yes but I would add importantly: not in the same way. Notice how extreme Unai Emery has taken it: Cech is playing the ball out to Mustafi and Sokratis who are almost standing next to their respective corner flags. They are so far back, the opposition, who are also trying to do their own version of the high press, are drawn to the ball. Both our defenders then play the ball back to Cech. This is repeated during which the opposition have moved even further down the pitch which is the cue for Cech to play the ball past the advanced opponents and start the basis of an attack. The flaw in this, as we know, is that Cech keeps on fluffing his lines and giving the ball away, creating heart stopping viewing.

It was very different last year. If we got a goal kick, Cech would either hoof it long or if he played it short to say Bellerin, he in turn would try and move it down the field as quick as he could. By this time, and in either case, the opposition would have formed two lines of five with their goal keeper behind them otherwise known as — The Bus. We all remember what would happen then; we would pass the ball backwards and forwards across the pitch just outside the opponents eighteen yard line trying to find a way past before losing possession and then having to chase back like demons trying to stop a breakaway goal.

Anything, anything but a return to the monotony of that model has got to be the reason why Arsenal supporters are remaining so calm and tolerant of such comedic incidents. If those kinds of errors had happened last season, uh I don’t want to think about the size and scale of the melt down.

Emery has more room to manoeuvre among the Arsenal faithful than he probably realises, the divisions among the support are still fresh in the mind and the idea of returning to them is, I am sure, something that should delayed for as long as possible.

Emery does have the choice, of course, he could play Leno. Many have pointed to Guardiola’s first season and the ruthless way that he dealt with Joe Hart. It was thought that England’s ex could not play the ball with his feet the way Pep wanted and because of that he was shipped out. Guardiola then went on to sign Claudio Bravo and we all know how that worked out. 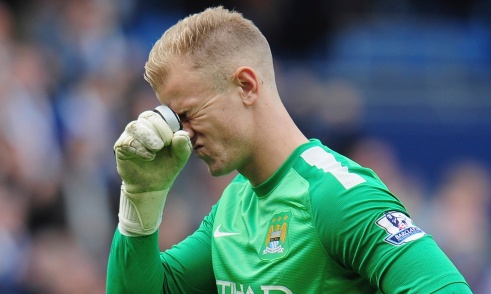 Back to Emery, yes he could have followed the Guardiola route or, as the Basque has done, give the old guard a chance to try and carry out his new way of doing things. Will Cech be able to adapt? It’s not looking good and we are going to see exactly what we have in reserve when we get to see Leno in the Caribou and the Europa. I like the choice that Emery has made of being slower in making radical change; big decisions on Ozil, Ramsey and Cech do not need to be rushed.

Guardiola took over a better squad and far greater spending power; he would have almost certainly been given the brief of your job is to the win the CL. Fanciful things like that might have swirled around the heads of our incoming Spanish contingent but there is a Gulf between the two clubs. In our case drastic change too quickly could have caused drastic problems, not something that would have been missed by the Arsenal hierarchy and as such I feel confident that an equally serious but far more down to earth message was made loud and clear to our incoming manager: no matter what you do always remember one thing – Arsenal do not do relegation.

This entry was posted on Thursday, September 6th, 2018 at 7:08 am and is filed under Uncategorized. You can follow any responses to this entry through the RSS 2.0 feed. You can leave a response, or trackback from your own site.