A Golden Chance Squandered but still only Half-time – Atletico Ratings

Massive excitement and expectation surrounded this great opportunity to send Mr Wenger off to his retirement with the decent divorce settlement of his first European trophy. Could we take some chances at the sharp end while defending successfully at the other? Simeone has constructed a team which few would want to go and see every week (I bet the Atletico supporters disagree with this assessment). Would Costa come back to haunt us or would it be a case of Griezmann up top on his own? The ground was pretty full when we arrived, the flags looked good and the atmosphere was buzzing with an electricity suitable for a game of such magnitude.

Can we all just take a moment to say Thank You to the guys at @REDactionAFC, @Arsenal and any Arsenal Fan that got in early to wave a flag tonight.

The Emirates was Beautiful!! pic.twitter.com/MJbRAyOZP1

Arsenal came out of the blocks at a furious pace. The referee immediately issued a yellow card for what looked like a soft challenge from the stands. Lacazette hit the post with a scuffer and then hit the goalkeeper with a close range header. The second yellow looked soft, too, though, having seen a replay, it looked much nastier, number 16’s studs crunching down on Laca’s instep. How many players would be left on the pitch after 90 minutes if this was to be the yellow card issuing rate?

80 minutes to take advantage of playing against 10 men. Could we find a way around the biggest and most skillfully parked bus in the whole of European football? Chances came and went. Danny broke through but caught the keeper’s foot with his attempt when a far post curler was beckoning. Mesut skied one, Kos couldn’t wrap his foot around a ball dropping to him at the far post following a corner, Nacho’s right footed volley went just wide; the ball just wouldn’t go in. Atletico’s defending was magnificent, with blocks and interceptions at crucial moments littering the first half an hour.

Atletico finally managed to get a foothold in the game towards half time and Griezmann twice found opportunities to shoot and test Ospina. 0-0 at half time, surely the goals would come in the second period?

The second period seemed like a non-stop procession towards the North Bank end of the stadium. Shots rained in on the Atletico goal, it had to be only a matter of time. On the hour that moment came. Jack stood up a delightful cross worthy of Liam Brady after Nacho had won the ball back on the edge of the opposition area. Laca rose Arshavin-like at the far post and planted the ball firmly past Oblak at last. The stadium erupted.

A crucial second goal failed to materialise thanks to great goalkeeping, superb body-on-the-line defending and some less than perfect finishing. Atletico used every tactic imaginable to disrupt the flow of the game, substitutions seemed to take minutes, players fell over at the slightest contact trying to buy breathing space, every restart from throws, free kicks and goal kicks was used to eat up so much valuable time.

We were all hoping that our defence would remain solid right up until the final whistle because conceding against ten men after such dominance would be heart-breaking. However, this current incarnation of Arsene’s team always seem to have one calamitous moment, locked away to disappoint us, where what can possibly go wrong, does go wrong.

With less than 10 to go, Danny overran the ball on the left flank gifting possession to Atletico. The ball was played forward to Griezmann, stood behind Kos, but both Monreal and Mustafi were playing him onside. Kos recovered beautifully judging the ball much better than the Atleti player but then decided that playing the ball back over his head was the best option. This seemed to be Kos’ only mistake of the game but what a costly one! Ospina parried Griezmann’s first effort and then Mustafi slipped as he tried to block the second but still got a knee on it.  The ball was in the Arsenal net from Atletico’s only chance of the half – a familiar story, unfortunately. 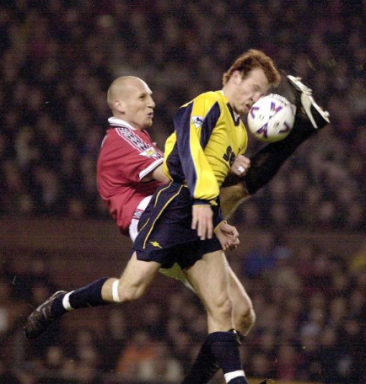 Perhaps a winner might have lifted us all from the gloom of that away goal conceded but despite good efforts from Rambo and Welbeck plus a skied blast from Xhaka, 1-1 was destined to be Atletico’s reward for soaking up all that pressure.

Surprisingly it seemed to be the Arsenal team who had run out of steam in that second period rather than the 10 men of the Spanish side.

Ratings (tempting to give all sixes and sevens, but that was only one moment in the match 🙂 )

Ospina – Fairly untroubled, did well against Griezmann and had little chance with the goal when it finally came … 7

Bellerin – Looked dangerous, especially in the first half and produced some fine moments throughout  … 7

Mustafi – Not much to do the whole game against one striker after the sending off. Why did he have to slip for the one and only time at that precise moment?   … 6

Monreal – Tireless as ever, worked his nuts off – again the goal is all we will remember, jogged back after the failed step up for offside … 6

Welbeck – Came out of the blocks like a greyhound and looked likely to provide us a goal. I’m not keen on his trying to win free kicks by exaggerating falls – stop it Danny  … 6

Lacazette – A marvellous header for the goal, some brilliant turns and movement plus several other good efforts – all repelled by Oblak unfortunately … 8

There were none and when you looked at the bench you could see why.

On to next Thursday, the tie is far from over and we have to be confident we can cancel out that calamitous away goal. When our away goal comes will be crucial – score first and it’s game on.

This entry was posted on Friday, April 27th, 2018 at 9:48 am and is filed under Uncategorized. You can follow any responses to this entry through the RSS 2.0 feed. You can leave a response, or trackback from your own site.