Guardiola is right to be unhappy & Sorry Spurs

Elneny’s red card has been rescinded. His sending off could have been costly, the completely useless Andy Marriner clearly lost the plot when the game got heated (as it should be) Has Marriner been punished  with a suspension or demotion? No, he hasn’t Should he be?

The referee and two linesmen wrongly decided Sane was offside when scoring for MC last night possibly costing MC the victory and with it many millions of pounds. Were the referee and linesmen questioned about their mistake? Has there been any fuss apart from Guardiola being sent to the stands for stating a truth?

This post could go the VAR route but we have covered the subject in depth, instead I am questioning the punishment of referees who make blatant errors.

Chas mentioned Graham Poll yesterday, my example would also be against Newcastle when Phil Dowd gave the worst example of refereeing in my footballing experience in a 4-4 draw at St James in 2011. Dowd escaped with an unblemished record having given Diaby a red card, awarded two highly dubious penalties to the Magpies and allowed Barton, Tiote and others to repeatedly kick our boys. 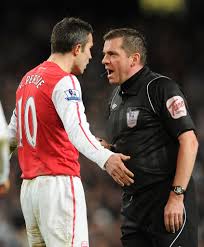 Yes, I know the argument about referees only being human and mistakes can be made but the general standard is poor. And of course, all referees are wa**ers, They have to be to pick up the whistle.

Did you know that since Spurs last won a major trophy (i.e. not the Carabootee Cup) in 1991, Arsenal have won the same number of trophies as Spurs have in their entire history!!

This entry was posted on Wednesday, April 11th, 2018 at 11:18 am and is filed under Uncategorized. You can follow any responses to this entry through the RSS 2.0 feed. You can leave a response, or trackback from your own site.

46 Responses to Guardiola is right to be unhappy & Sorry Spurs