The chavs came flying out of the blocks, high press, overloading the centre backs with Hazard, Pedro and Willian confusing the whatnots out of Koscielny and Mustafi. Thank Dennis their early goal was cancelled out by Nacho’s crazy double kiss header, else the game could have run away from us.

Our midfield was all over the place with no-one quite sure what they were supposed to be doing as the ball flashed past them.

Gradually we got a toe-hold and had the two best chances in the rest of the first half; a Granit fizzer from a free kick and Mesut’s deflected right footer just before the break. 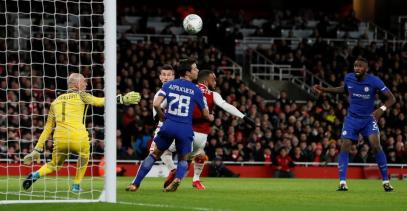 So much better second half, even without the cones! Chelsea began to play for the away goal counting after extra time. Their rotational fouling was not penalised by the lenient Oliver. Granit must have had a nose bleed being in the chavs’ six yard box but there he was, at a ridiculous altitude at precisely the right moment; almost as if it was pre-ordained. Alexander missed a chance to put the game to bed which, being kind, was probably harder than it looked. No major scares in the last ten minutes – job done, off to Wembley.

Ospina – Busy Doing Nothing – 2 shots on target for the chavs didn’t leave our Colombian much to do ….7

Mustafi –  Working in the Coal Mine – always tries hard, improved as the game went on….8

Koscielny – Leader of the Pack – seemed to be fighting his injuries even more than usual but still imperious  ….8

Bellerin – The Way You Look Tonight – quiet, didn’t do much at all ….6

Wilshere – Push It – barely got a touch in the first half, an inspiration in the second ….7

Elneny –  Nowhere to Run – covered every blade at the apex of the upside down midfield triangle ….8

Iwobi  – Back Door Man – most tackles, most misplaced passes, bizarre  ….7

Ozil – Pretty Beat Up – the man with the weave decided kicking him was the only way to lessen his impact ….7

Lacazette – So Lonely – even less support than normal with the dog-botherer gone and an extra body in midfield ….7

This entry was posted on Thursday, January 25th, 2018 at 9:32 am and is filed under Uncategorized. You can follow any responses to this entry through the RSS 2.0 feed. You can leave a response, or trackback from your own site.