The 1952-53 season started well for Arsenal as we won the opening two fixtures but then only managed to win two of the next eight matches. A 5-1 victory over Liverpool at Anfield on November 15 helped to inspire the team and the goals continued to flow throughout that winter. We beat Bolton 6-4 (away from home on Christmas Day), Wolves 5-3, Spurs 4-0 and Derby 6-2 in the next couple of months.

April proved to be the decisive month; the Gunners played eight league matches during the month, including a run of five straight wins. The last game of the month though, was away to title rivals Preston. Arsenal was two points ahead with two games remaining and could seal a league title with a victory at Deepdale. However Arsenal suffered a 2-0 defeat and both sides were level with one match left. Preston played first, beating bottom side Derby 1-0 on Wednesday. Two days later Arsenal knew that only a home victory over Burnley would give them the title. Burnley took an early lead but Alex Forbes, Doug Lishman and Jimmy Logie all found the net to make it 3-1. Burnley made in 3-2 in the second half but Arsenal held on for the crucial two points and we won our 7th League Division 1 Championship. It was two points for a win in 1952-53 so we ended the season tied with Preston on 54 points each; we won based on goal average (Arsenal 1.516 – Preston 1.417) – goal average being the rule back then, not goal difference as it is today. (goal difference, Arsenal 33 – Preston 25)

We had reached the FA Cup Final in two of the previous three years, but in 1952-53 we lost to eventual winners Blackpool in the quarter-final. 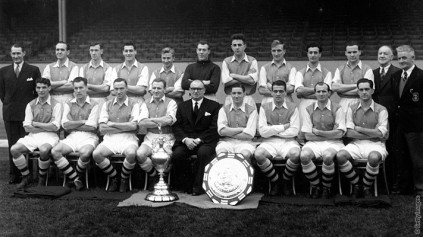 Also that season… Stan Mortensen scored a hat-trick for Blackpool in the FA Cup final but the game was remembered for the contribution of his team mate, 38 year old Stanley Matthews. Blackpool beat Bolton 4-3 in the (Matthews) final, and Mortensen’s hat-trick remains the only one in a Wembley FA Cup final.

During WW2 he was an Royal Air Force pilot and achieved the rank of Squadron Leader.

For his service in missions on D-Day, he was awarded an MBE.

This entry was posted on Monday, October 9th, 2017 at 7:51 am and is filed under Uncategorized. You can follow any responses to this entry through the RSS 2.0 feed. You can leave a response, or trackback from your own site.