Can we win the CL? Is it too early to start dreaming?

That question was not mine. It was Eddie’s. But, here is our answer. YES,we can!

There was a lot of discussion, following Micky’s fantastic curtain raiser yesterday, as to how much risk-averse Arsene should be. Truth be told, we were not expected to win the group. Like last year, and the year before, and the previous year as well. Same old, same old!

To be fair, splitting points home and away against the French oilers PSG was no mean feat. Nevertheless, given UEFA’s strange new rules, PSG still were above us in the standings before the match, despite our far superior goal difference. Plain injustice! Nevertheless there was all to play for. We have already had a measure of PSG’s visually stunning but ineffective acrobatics in front of goal. Ludogorets had all to play for, to try and manufacture a fragile progress to the Spursday league. And so had Basel!

What can one say about FC Basel 1893? A proud club with a long name and equally tall pretences? Not! Their home record in CL against English clubs speaks volumes.

In the event, Arsene chose a team that was fit for purpose. Perez up front which I thought was just ideal. No funny histrionics, just going about your job industriously. Use your anticipation to take promising positions within the box, and just take your chances. Simples! What a fantastic hattrick as well. Well done Perez.

The most important part of Perez’s game for me was not trying to do too much. No jostling for space in the central midfield, leaving all the opportunity, as GiE puts it, for “Ozil’s and Alexis kick a ball round a dustbin all day, you just know they’d find ever more creative ways of making it look beautiful.” In the event, it turned out even better. Not only beautiful, but also superbly effective, as we saw yesterday. To quote Beebs: “Lucas Perez’s second goal came at the end of a 33-pass move. No goal in the Champions League this season has involved more passes.” Wow, just awestruck!

And then Iwobi! What can one say. Fast, hardworking, picking up loose balls in the midfield and relay them along to the magicians, Alexis and Ozil, to weave their magic. And then wait in the box for any opportunity that might arise. And what a nice goal as well! My highlight of the game was Iwobi’s big smile after the tap-in and running off to hug Ozil. Just brought a tear to my eye. It really did! 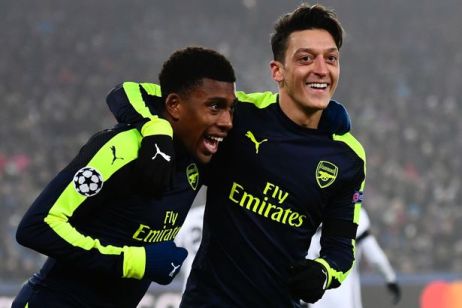 I thought Rambo played an effective role, waking up occassionally to team up with the two magicians to weave the wand in the midfield. Xhaka (the Gooner one, the other one was rubbish) just played tango very effectively. Good solid game. So, did Gibbs. Gabriel and Kos were effective. I would like to make a special mention of Rob Holding. A good honourable CL debut! Well done son!! Could have done better on their consolation goal, but a good show nevertheless!!!

Ospina had little to do, but made a solid contribution as the first line of attack. Altogether, a pleasing team performance. As Arsene said earlier: “That is what football is about. It’s not about one player. It’s not me, me, me. It’s about one, two and three”.

Finally, it is time to wait in the wings to find out who gets the opportunity to face our next onslaught on the CL trophy this year. Onwards and upwards!

This entry was posted on Wednesday, December 7th, 2016 at 1:02 pm and is filed under Uncategorized. You can follow any responses to this entry through the RSS 2.0 feed. You can leave a response, or trackback from your own site.

165 Responses to Can we win the CL? Is it too early to start dreaming?