Super Subs to the Gooners’ rescue!

A subdued Arsenal performance was rescued with an 89th minute equaliser at Old Traffford with Olivier Giroud thumping a header from an Alex Oxlade-Chamberlain cross and earning Arsenal a point.

The journey to the North West began at 6am and much of the talk on the coach journey was whether Alexis would start after international duty and a slight hamstring strain. The other conundrum was who would replace the injured Hector Bellerin as it was confirmed the Spaniard would be out for 4 weeks with an ankle injury. There was some reservations about Jenkinson playing in a game of huge importance having been out for almost 9 months and not having played much first team football since his return.

The news filtered through at 11:30am that Alexis would start but despair about Xhaka not playing and Ramsey slotting in which seemed a surprise. As the Arsenal supporters were streaming towards the away end the fans were in fine voice as per usual. 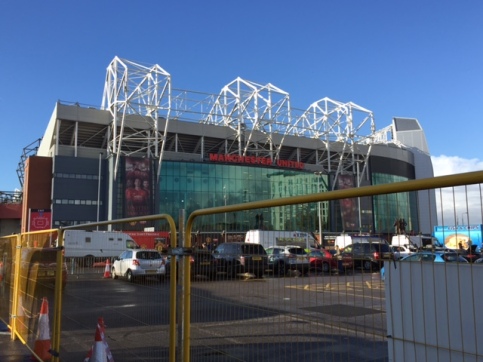 The game started and Arsenal kept the ball well and the first real chance fell to Alexis and he missed a sitter. A cross from the left was met by Alexis and his header was wide and the supporters were regretting a missed opportunity with the goal gaping at his mercy. By this time the fans were questioning the Manager’s decision to play Ramsey who was looking very slow and the decision to also stick him on the left hand side. The travelling support were becoming more and more frustrated with Ramsey’s lack of effort. One fan declaring “Monreal has been made to look s**t because Ramsey is not helping him!!!” 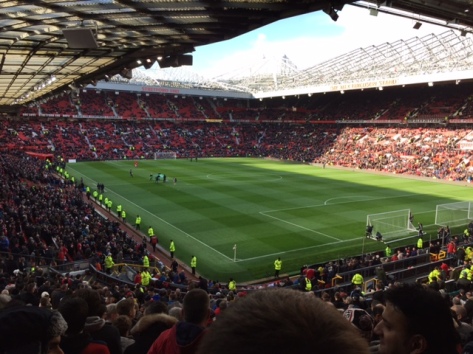 The fans then became very irate as referee Andre Marriner did not produce a yellow card for the Utd player who hacked Walcott down on an Arsenal counter attack and then a minute later booked Alexis for a foul in the same area of the pitch. A chorus of boos greeted the referee.. The fans were then screaming at Marriner to send Darmian off for a bookable offence. “Off off off off!” was the scream from the fans. Again the referee bottled it. Then, as Valencia entered the Arsenal box, it was claimed Monreal had fouled the right back but the penalty appeals were waved away and Arsenal fans gave Valencia a rollicking for what we thought was a dive.

United then started to ramp up the pressure before half time and Cech saved brilliantly from a low shot from Juan Mata. Half time then came and fans were bemoaning Ramsey’s performance on the left and rightly so. One fan gave his view “He should be making the f**king change at half time by bringing Ramsey off! What does he offer to this team!”

The second half began and the away support were taunting the Man Utd fans for their lack of atmosphere at Old Trafford…… “Shhhhhh shhhhhh shhhhhhh!”.  Arsenal were having lots of the ball but doing very little with it with cries from the crowd “stop passing it sideways!” Twenty minutes had gone by and still no signs of an Arsenal substitution. Then the killer blow arrived on 68th minutes as Herrera played the ball back for Juan Mata to slot the ball home and put Man Utd in the lead. The Arsenal fans felt a sense of injustice at not deserving to be a goal down. “This is absolute bulls**t” said one lady in the stands.

The substitutions were finally made with Giroud and then Oxlade-Chamberlain coming on and were greeted happily in one sense, but with absolute dismay in another. “What the f**k is Ramsey still doing on the pitch?! Why is he being shoehorned into the team and not having to fight for his place FFS?!….. was one supporter giving his rational view on the matter.

Then on 89 mins came the moment which the fans had been waiting for all game. Chamberlain whizzed down the right flank and produced a peach of a cross which Giroud met and powered past a helpless de Gea. This sent the Arsenal fans wild and many rushing towards the barriers to stick signs up at the Man Utd fans.. On a sad note though some Man Utd fans started to racially abuse a fan who was celebrating Giroud’s goal which left a sour taste in the mouth. The police intervened and he gave a statement which delayed our coach getting back to London. 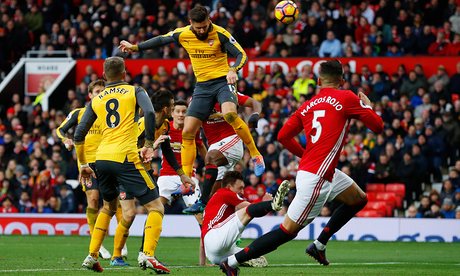 So Arsenal rescued a draw after a busy international break and now we move on to the midweek game against Paris St Germain in the Champions League. As fans were going back to their coaches much of the talk was about the team line up for PSG and that Ramsey should be taken out of the team or put in his best position. The play was slow and lethargic today because of Ramsey playing on the left when Iwobi or Chamberlain should have played. Perhaps this could be a valuable point come the end of the season.

Written by Sir A Hussain

This entry was posted on Sunday, November 20th, 2016 at 12:09 pm and is filed under Uncategorized. You can follow any responses to this entry through the RSS 2.0 feed. You can leave a response, or trackback from your own site.

23 Responses to Super Subs to the Gooners’ rescue!