Arsenal 6 Ludogrets 0…………a few thoughts on the game.

Thracians thrashed and we have a better clock tower; well we do, the clock tower near the Highbury barn is much better than theirs by about six goals I would say.

Sanchez, Walcott’s twin brother, Oxlaide-Chamberlain all got on the score sheet but it was Mesut Ozil’s night with his first hat trick at THOF.

Arsenal cruised past the Bulgarian champions with the ease in which I think most anticipated; that’s to say, anticipated in the way that none of us knew what to expect from Ludogrets but most presumed, and rightly so as it turned out, that the champions of such a lowly league were hardly going to produce a team capable of beating us in the form we are in.

No, but, that is not to say that we didn’t have a few scares; it took two fine saves from the outstanding Ospina to keep us ahead: Sanchez having scored from what is fast becoming his trade mark “Scoop”. I am not sure what else to call it; it was as inch perfect as the “Scoop” he sent over for Ozil to score one of the best goals I have ever seen against Swansea on Saturday.

The Chilean’s goal settled the nerves and gave a moment to reflect on what a clever team selection Wenger had made. For twenty years I have been trying to guess the team he is going to select and although there have been a couple of times when I have been really annoyed usually following a sound thrashing; that said, I am not daft enough to realise that my criticism was made with the use of hindsight. Anyway once again I couldn’t guess and once again I was really impressed with the way Wenger deployed the troops: Monreal needed time to cool down from his weekend roasting which gave Gibbs a chance and the Ox for Iwobi was smart.

It is all very well going on as we do about how much depth we have to the squad but it is easy to forget that they are human beings with feelings and they need be kept on side and motivated and that was exactly what Wenger was able to do to two key players in the very important Gibbs and Oxlaide-Chamberlain. Oops I almost forgot, that is three key players with Ospina.

Theo’s twin brother continued to impress with a superb long range effort from way outside the box just before half time which allowed us to go into the break having doubled our lead and a whole lot more relaxed. I say Theo’s twin brother of course because there is no way anyone is going to persuade me that this is the same Theo that we have had at the club for what, ten years now? No way. Theo’s twin seems to have worked out his best position in no time and even more important he has been given provisional membership into the elite Ozil, Sanchez and Cazorla club. Yes a very exclusive club that very few get invited into, Ramsey has a provisional membership, Giroud by contrast doesn’t.

What this membership gets you is — the ball, it means that Ozil, Sanchez and Cazorla will pass to you; they wouldn’t have passed to Theo of last season, no point he would have just lost possession but his twin this season is able to control it and make some telling passes and score some very important goals. I am not sure that Giroud will ever be in the club, have you noticed how those three will try a really complicated pass to one another rather than make a simple short easy pass to the Frenchman.

In Arsenal world tonight was a resounding win but it will still go almost unnoticed. I am not sure whether to be pleased or annoyed. I suppose it is useful that all the media continue to kneel in front of Pep, lip gloss applied, while we go on winning almost unnoticed, it certainly keeps the pressure on Man City and off of us. It is a two horse race, no doubt in my mind about it.

But we were good tonight, we are very good, who would have expected Ozil to start scoring the way he is and before I go any further I want make sure Perez’s two assists do not go unnoticed. Do you remember when we bought him and we were all excited about how finally we might have someone who can play with Ozil and Sanchez up front, someone who has the same close control as those two titans of our team, well you saw it tonight. Perez was outstanding which of course leaves me with a bit of a problem choosing my superlative for Ozil but before I do a thought crossed my mind as he completed his hat trick. 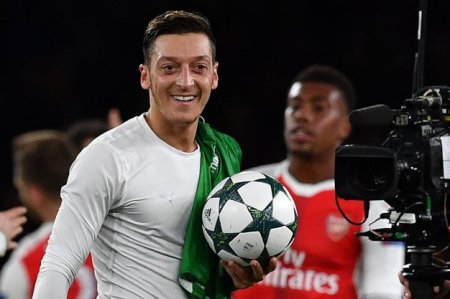 What would Ozil have to do to be regarded as the best player we have ever had at Arsenal? I will leave that one to you to discuss.

This entry was posted on Thursday, October 20th, 2016 at 8:55 am and is filed under Uncategorized. You can follow any responses to this entry through the RSS 2.0 feed. You can leave a response, or trackback from your own site.