Ramsey is The Man

Chav. Know what it means? It is an acronym for Council House And Violent used by police on charge sheets. Gone are the days when Chelsea fans really were Chavs, nowadays they have been priced out of the ground. For all his wealth Mr Abramovitch has still allowed Stamford Bridge to have the 4th most expensive tickets in the PL.

What do the real diehard Chelsea fans think about their team? Are they sad that the club squander money on big name players who do not perform (Cuadrado, Falcao and the scores out on loan) or do they exalt in the fact that Chelsea are Champions? I know that I wouldn’t give a donkey’s butt about the balance sheet if Arsenal were to win the PL and I guess the Chavs don’t either.

As to this afternoon, I don’t accept the notion that Arsenal will be lacking in confidence following the midweek fiasco, 6 of the players are like to be dropped and those coming back add hugely to the team. Nor do I accept that Chelsea are over their problems because they beat Maccabi at home – as they should.

Will Chelsea be undone by the injuries to Willian and Falcao? Of course not. Will Fabregas have his best game of the season? Of course he will. Will Mourinho behave like a spoilt brat? You know the answer. Will Mr. Wenger shake his hand? Who cares apart from the media.

We know Chelsea have a fine team who are struggling defensively, they failed to buy the CB they wanted but still have Zouma, Terry, Ivanovic, and Cahill to choose from! Luxury (written with a Lancashire accent). A midfield of Fabregas, Oscar, Matic, Ramires and Obi One Kanobi is sure to gel at some point. Up front Costa is a petulant child (though I wouldn’t say it to his face!) and for this reason I hope Mr Wenger picks Gabriel. We know how fantastic a player Hazard is and AW must be gutted that he failed to sign him.

The Arsenal team?  I am sure it will be one which started against Stoke (unless BFG is fit). 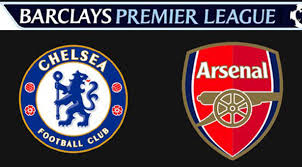 It becomes increasingly clear what a vital cog Ramsey is in the team. I have said this before and will say it many times, Ramsey is a better Ray Parlour.

Cazorla has been struggling of late. Could AW play the OX instead and bring Ramsey more central alongside Coquelin? He has tried to get Ramsey to play deeper in the past and it has not worked but that was alongside Arteta, Coquelin’s defensive discipline may be a better fit.

Once agin we have the Giroud/Walcott debate. Against the sluggish Terry/Cahill combo Theo is the obvious choice but I would certainly give OG at least 15 minutes. Or can we trust Campbell in such a big game?

I have to say that despite what has been written on AA this is NOT a season defining game; when was the last time we won at the Bridge? The bookies odds are against us and so are history and the experts. If we win it will be massive and send Me-rinho into the relegation zone with 6 games gone – effectively finishing their chances of winning the title. But ……

I have never enjoyed games at the Bridge – either I was shit-scared thanks to their knuckle-head Nazi fans (in the days of Yore) or because their team have comprehensively outplayed us. There have been great moments – Kanu’s hatrick, Nigel’s thunderbastard, the magic 5-3 which included a hatrick from some Dutch bloke and the JT faceplant, but they are few and far between.

Can we win? Of course. Will we?  I wish I could be positive about this one but I am not. We have scored just twice in 7 games against them and have not won for 7 games, Me-rinho has never lost two successive home games as a manager. On the plus side, we have won 7 and drawn one of our last 8 away games and Theo is on fire (11 from 11).

I would be delighted with a draw.

This entry was posted on Saturday, September 19th, 2015 at 9:25 am and is filed under Uncategorized. You can follow any responses to this entry through the RSS 2.0 feed. You can leave a response, or trackback from your own site.

251 Responses to Ramsey is The Man