Time for Revenge. Anderlecht Away

Many years ago in a land far away our valiant boys took the field for the first leg of the 1970 Inter-City Fairs Cup Final which today is the equivalent of the Europa Cup. We had been poor for a number of years and recently lost the League Cup to Swindon, yes Swindon, so the prospect of playing the Belgian Champions was worrying.

Despite being a rabid Gooner and having been to all the league games at home and many away, I didn’t travel abroad (my Mum wouldn’t let me). Just as well as we lost 3-1. At three down it was all over but Ray Kennedy managed to notch one back in the 82nd minute to give us some hope for the return – which I will write about when Anderlecht come to the Emirates.

The current Anderlecht team have won their league 4 out of the last 5 seasons. Quite honestly I know very little about Anderlecht apart from the fact they play in the Constant Vanden Stock Stadium and that one of their players had a trial at Arsenal as a 16 y.o. (Dennis Praet). This season in the CL they drew away at Galatasary and lost 3-0 to Dortmund. After 11 games they are top of the Belgian league, 3 points ahead of Brugge.

Arsenal have selection problems (!!!).  Ever heard of Ryan Huddart? Neither have I, but he is on the bench for us tonight and if Martinez gets knocked he will be playing. A 17 y.o. who has just signed professional forms in goal in an away CL game! Then there is the defence – Chambers will play CB and Bellerin at RB, two 19 y.o.’s. This is Arsenal we are talking about not some Mickey Mouse organisation and yet the 8th richest club in the world has allowed this to occur. Am I bovvered? You bet I am.

Midfield and upfront we are much better served. There are many permutations but I go with this one

Not sure who we will have as a defensive sub apart from Monreal but hopefully we will not need one.

Food: Belgium is not renowned for its cuisine though for a few years in the ’90’s Belgian beer and Moules was popular in N. London. Belgians like a bar of chocolate and a truffle or two and of course are responsible for the dreadful Mandarine Napoleon which is made by mixing brandy and tangerines. I suppose what most Belgians eat is waffles …. they love a waffle.

As I have a little time perhaps you will allow me to tell you about another time an English team went to play on Belgian soil.

It was 15th June 1815.  The English squad had their version of Podolski, Mertesacker and Ozil in the team (at that time known as Prussians), they were taking on the current European Champions, the French. Our boys were managed by the Duke of Wellington and the opposition by the foreign genius and Mr Wenger of his day Napoleon Bonaparte. You will not need me to tell you that Our Boys gave the French a good spanking (one reason being the English forces numbered 120k and the French 72k). 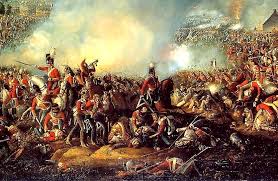 Beating the French away.

Will we lose 3-1 as we did all those years ago? Unlikely. The two teams have grown in different directions and despite the excellence of the Belgium national team Anderlecht are the weakest team in the group. We should get a result.

This entry was posted on Wednesday, October 22nd, 2014 at 9:49 am and is filed under Uncategorized. You can follow any responses to this entry through the RSS 2.0 feed. Both comments and pings are currently closed.

179 Responses to Time for Revenge. Anderlecht Away