The other day LB wrote an interesting post entitled “Is Thomas Vermaelen still needed? This led me to think about the player as a captain and conversely the captain as a player.

Before looking at individuals in those roles I got to thinking just what should we look for in a Club Captain, note the capital letters, in my opinion the Club Captain is equally as important as The Manager, The Chief Executive or The Owner.

So the candidate should be of sufficient stature, not just in a physical sense, but in the status he holds in the game as a whole. To attain the necessary status he must have been around a while, he must be a good enough player to command a starting place in the club’s first team and preferably in his National side as well. He should also have earned the respect of not only his own team but also opposing players and particularly the on pitch officials. Needless to say he must also be media savvy, articulate and able to offer rational answers to irrational questions at times of both elation and disappointment in post match interviews for example. 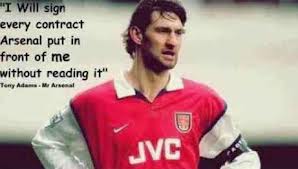 Looking back, I can recall Frank McLintock, sleeves rolled up barking out orders to players, organising his defence at corners and free kicks and generally running things on the pitch. Similarly with Tony Adams and of course Patrick Vieira. Arguably the best Captain I ever saw was the incomparable Bobby Moore, calm authoritative and respected throughout football.

Latterly the armband has been a bit of a poisoned chalice, not only at Arsenal but also at international level with England. Fabregas and van Persie were appointed only to depart shortly after, Vermaelen suffered both a shocking loss of form and a series of injuries and could soon follow the other two out of the club and there are rumours that Arteta could also go if someone of the stature of Khedira or Bender are signed. In the England team the captaincy has, disgracefully, been swapped around more times than at a kid’s game of pass the parcel.

At the moment it appears to me that should Vermaelen leave, the only rational candidate would be Per Mertesacker, but for how much longer can he command that starting place in the team? Longer term we can all hope and expect the appointment of Jack Wilshire, but will it happen?

What are your views on both the Captain’s role as, should it be largely ceremonial, tossing the coin, handing over a little pennant and posing for a snap with the officials or, as the Manager’s voice on the pitch and the players representative off it. Surely there must come a time when a stop is put to the absurd situation of referees being mobbed by a group of angry players, then only the Captain should be allowed to approach the officials, and that will require a calm sensible approach, one more attribute needed for the job.

Who should our next Captain be?

This entry was posted on Tuesday, July 15th, 2014 at 9:33 am and is filed under Uncategorized. You can follow any responses to this entry through the RSS 2.0 feed. You can leave a response, or trackback from your own site.

78 Responses to Arsenal’s next Captain