One week for Arsenal …….. Six months for Walcott

Le Professeur had little good cheer to offer on the injury situation at his Friday news conference. Giroud 90% out, Ozil, Bendtner, Ramsey and Gibbs definitely out. The one bright spot was that Oxlade-Chamberlain is expected to resume normal training next week.

Gilberto Silva was training with the first team, the last ex-Arsenal alumnus to do so was a certain French mid-fielder who then signed a contract and has been an important part of a successful first half of the season, could the “Invisible Wall” be back?

One important bit of news, whilst not exclusively Arsenal related was worthy of note, Mr. Blatter opened his mouth, and for once didn’t immediately put his foot in it, when he launched an attack on cheats.

In his FIFA Weekly column he urged a global crackdown on the “cheating” players who dive in football and even suggested “time penalties” to stop those feigning injury from immediately rejoining the game.

Blatter also reminded referees to continue with play “unless there is a serious injury”. “The ball is in the referees’ court” he said “The instructions are now clear on this matter: if a player is lying on the floor, the opposing team are not required to put the ball in to touch.

I don’t know about other AAers, but I for one would love to see a crackdown on the diving cheats and on the spurious injuries that waste so much playing time. I’m sure one of our stats fans could tell us how much of the ninety minutes playing time is taken up by such antics. I feel sure it doesn’t all get added on to the “injury time”.

Not even a hint of speculation about who we might buy, and Arsene ruled out any approach for Berbatov.

The dreaded sickness bug struck again, this time Giroud is suffering, is it time to buy the player’s lunches from a different kebab shop?

The pre-match entertainment on AA was supplied by Ant and Duck, on their alcohol fuelled  peregrination to the Emirates.

No question who has the NLD bragging rights, firmly fixed in the Arsenal camp!

There was a feeling of inevitability about the game from the very start.

Watching at home, it soon became obvious that the poor old Spuds were considerably less than the sum of their very expensively assembled parts. I had spent the early evening watching an excellent performance of Snow White and the Seven Dwarfs at the Little Theatre in Sheringham, a traditional Christmas pantomime, and later watching Spur’s twin strikers floundering and failing I felt I was again watching two traditional Panto characters, the Ugly Sisters.

One rather sour note towards the end of the game, as Walcott was being stretchered off he, and the para-medics carrying him, were pelted with coins and bottles and subjected to dog’s abuse by the Spurs “fans”. The selfsame “fans” who, last season, had jeered at Bacary Sagna as he lay pitch-side with a broken leg. Walcott’s response, a two fingered reminder of the score, was more than justified in my opinion. The FA would need to be entirely witless if they decide to take action against him.

Two more injuries to contend with, both Walcott and Vermaelen could be out for a while, while the latter is a cut shin, the former could well be a longer term ligament injury.

Hey Ho! Coventry at home is a good draw for the 4th round and will present le Professeur with more chances for squad rotation.

There was no definitive news on the Theo Walcott injury, If it’s a knock he could make the Villa game, if it’s ligament damage he could be out for a month. Olivier Giroud is expected to be fit to play next Monday, as will Jack Wilshere who took a knock on an ankle. The scan on Thomas Vermaelen’s knee will be assessed this week.

One piece of definite news, we will not be signing Lewandowski either in this month or in the summer, he’s going to Bayern at the end of the season.

The FA are to consult with Police and “look into” the behaviour of the Spurs fans who hurled not only abuse but also missiles at Theo and the medics as he was carried off on Saturday. Obviously Arsenal were correct in reducing the Swamp Dweller’s ticket allocation for the game. If that’s the way they are going to behave the allocation should be reduced to zero.

The FA announced that they would be taking no action against Theo following his gesture towards the obnoxious crowd of loons purporting to be Spurs supporters.

On a cold, wet and windy morning what could be worse than to wake up to the headline:-

MY WORLD CUP DREAM IS OVER 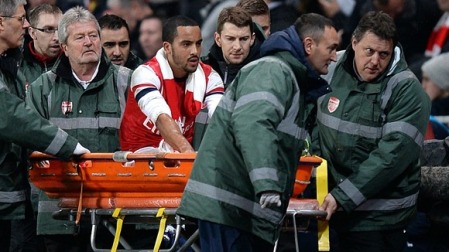 Yep! The news we had all been fearing turned out to be worse than we thought, a ruptured Anterior Cruciate Ligament means that Theo misses the rest of the season and almost certainly the chance to play for England in the World Cup Finals.

Dare we hope that Theo could emulate Roberto Baggio who, in 2002, returned from a similar injury in just 77 days? That entailed half day re-hab sessions eleven times a week.

At the moment the plan is for Theo to have surgery in the next week or so, depending on how quickly the swelling goes down, to be back running by June, complete a full pre-season programme and be ready to play when the new campaign kicks off.

The FA Cup fourth round tie against Coventry City will take place on Friday 24th January, kick-off 7.45pm and will be live on BT Sport.

Coventry have already complained about the Friday evening spot, claiming it will make it difficult for their fans to attend, are so many of them subject to curfews?

Alex Oxlade-Chamberlain is back in full training, could he feature in Thursday’s U 21 game away to Fulham? Another run out in the following week’s U21 match away to Middlesbrough and all being well, he could be ready for the FA Cup tie against Coventry.

Mesut Ozil has been named Germany’s national player of the year following a fans’ poll conducted by the German Football Federation. Mesut has won the award for the third time in a row, beating Bayern Munich pair Phillip Lahm and Thomas Muller.

Theo Walcott has been voted December Playmate I’m sorry PLAYER of the month.

In transfer speculation it has emerged that although both Arsenal targets Diego Costa and Jackson Martinez have release clauses in their contracts (£31.4 million and £33 million respectively) they do not come into effect until the end of the season. The Daily Mail seems to think that we are in with a chance of getting Real’s Alvaro Morata if we pay a £1.7 million loan fee.

Niklas Bendtner may be back sooner than expected, he could resume training in the next few days.

One piece of truly World shattering news, (not Arsenal related) is reported by Sky Sports, Fulham have not made an enquiry for Man City’s Joleon Lescott and, in case any doubt remains,

I can report that I am not dating Lewis Hamilton’s ex,

Bayern Munich received 18 thousand requests for tickets to the Champions League clash at the Emirates despite the price of £62 each, Bayern are to subsidise each ticket to the tune of €30 thus reducing the price from €75 to just €45. Perhaps other clubs could take a leaf out of the German club’s book and help out the away support. What about it Arsenal?

According to The Metro Arsenal teenager Serge Gnabry is a summer target for Borussia Dortmund as they seek to rebuild following Robert Lewandowski’s agreement to join to Bayern Munich. Dortmund manager Jurgen Klopp has been impressed by the attacking midfielder and is ready to splash out on his services as he transforms his side following the departure of the jewel in their crown. Well Herr Klopp Serge is one of the young jewels in Arsenal’s crown so keep your sticky fingers off!!!

That’s it for another week, enjoy the relaxing weekend.

This entry was posted on Friday, January 10th, 2014 at 9:36 am and is filed under Uncategorized. You can follow any responses to this entry through the RSS 2.0 feed. You can leave a response, or trackback from your own site.

84 Responses to One week for Arsenal …….. Six months for Walcott