End of the year, and part of the ritual is to take stock, and look forward towards the future with glorious plans and renewed expectations. And what a fantastic year this has been for Arsenal fans! At the midway stage in the Premier League last year, Arsenal was lying 7th, well off the pace for Champions League qualification, and even off Spursday football places. Qualifying second in their group, Arsenal faced a tough round of 16 encounter against Bayern Munich, one of the best teams in Europe at that stage. With significant changes to the Board, a new owner in tow, there were uncertain times for the club management. The fans were up in arms, with substantial ammunition provided by a negative press, dubious pundits and even the Arsenal Supporters Trust. Difficult times indeed!

But Arsenal managed to make a fantastic turnaround. Attaining qualification for CL was nothing short of a miracle! Yes, Arsenal lost out in a two leg epic battle against eventual winners Bayern, but before that showed their mettle in an amazing 2-0 away victory. Despite all the negativity, good progress was made in the summer transfer window. The progress continued in the current season, and Arsenal is sitting at the Top of the Premier League at the halfway stage. Qualification to the Champions League was gained from the aptly termed “Group of Death”. Grudging acknowledgement of Arsenal’s strength and mettle is gently arising from beneath the rubble of disdain and the green fumes of envy. Indeed, if the league was played over the calendar year, Arsenal would have been Champions of 2013. Oh, what a year this has been!!!

All in all, a good year in prospect. There are plenty of challenges yet to be met. Plenty of time still before we even begin to celebrate the achievements of this team. But, also plenty of positive vibes and expectation in tow. So AA ers, looking towards the future, what did we learn new about Arsenal this year, and what were we reminded of afresh, that we did not know with so much certainty one year back? Let us discuss. Here are a few of my tentative suggestions. It was not all rosy, though. Injuries continued through the year. The squad seems a bit thin. Progression to the round of 16 in the Champions League was gained, but only in second place. Like last year, we have drawn Bayern Munich. Lovely games in prospect, but significant challenges as well. And if the vitriol from the fans is a bit subdued due to the sustained run of fine results and resilience in the field of play, the negativity from the press and pundits continues unabated. Perhaps most importantly, whether by luck or design, Arsenal continues to be at the receiving end of poor refereeing decisions. Alas, some things never seem to change!

First, same time last year we did not know what a fantastic central defensive partnership, together with a very competent goalkeeper, we were developing. Indeed a large part of our success this year owes itself to the fantastic defensive pairing of Per and Kos. What a duo!!! And what a great leader in our beloved BFG! When Verms got injured, who would have thought we would have such a strong defence where even a fit squad captain cannot find a place? 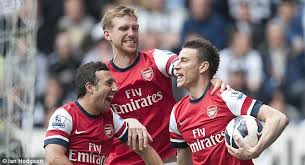 Second, one of the best revelations of the year was the discovery that Ramsey had developed into such a fantastic player. He was the subject of much of the blame and vitriol during our indifferent showing in 2012. Perhaps somewhat undeservedly. But our beloved Rambo rubbed all these adversities off his shirt, returned in style from his long standing injury, and has grown to the stature of one of the best midfielders in the League, perhaps in Europe as well. 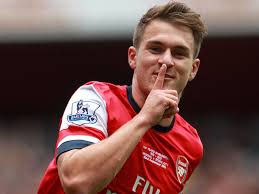 He has shown a very mature head as well, leading for his country at a very young age. In tow, Jack Wilshere is developing into a fine player, if somewhat idiosyncratic on occasions. Together with Theo, the Ox, Gibbs and Jenks, they also form a British core to the team which had been somewhat deficient for a while. Who would have thought a year back that Rambo would develop into such a fantastic and dependable player, and Jack’s game will be coming along so nicely as well?

Third, one of the most encouraging developments of the year, at least for me, was the maturity with which the owner Kroenke, Gazidis and the Board conducted themselves. Perhaps the best development was that the Board did not interfere in footballing matters, leaving team and signing decisions to the people who know best, led by one Arsene Wenger. If you think that this is not a surprise, look around at other clubs. Several clubs have met with significant disasters as a result of owner power, such as the Spuds, Cardiff and even the Chavs, and in some others the environment is not very nice even if the performance has not been equally devastating.

The principles of the club, that a fantastic team can be developed without wasting money on the wasteful purchase of overpriced bench idols, was not compromised by a new owner and a new look Board. Surely, this was not a given at the start of the year, after the club had gone through a rather aggressive ownership contest and change of hands.

Fourth, amid the mantra of financial fairplay and traditional hesitancy to spend big money, and the recovery from an expensive move to the Emirates, who would have thought that Arsenal would spend their money where it mattered most?

In the procurement of one Mesut Ozil, who despite his tentative adjustment to English football and the Arsenal way of playing the game, has given the team something really special, Arsenal showed purpose and ambition, and real ability to deliver trophies. This came together with the free transfer of one Mathieu Flamini – ah, what a fantastic transfer move!

Fifth, against the backdrop of significant unrest and disquiet among good-weather fans, ably supported by the press and pundits, who would have thought that the positive outlook of a sane fan-base would shine through? The struggle against the doubters and doomday-usherers still continues in earnest, in ArsenalArsenal and elsewhere, but The Home of Football still reverberates with the positive chants and outlook towards the new dawn awaiting in the New Year!!!!

AA ers, what do you think? My final thoughts are:

Where would 82 points put us in seasons past?

This entry was posted on Tuesday, December 31st, 2013 at 9:14 am and is filed under Uncategorized. You can follow any responses to this entry through the RSS 2.0 feed. You can leave a response, or trackback from your own site.

90 Responses to Old wine, or new bottle, or old wine in new bottle?