Now We Can See How Much Damage Van Persie, Cesc and Nasri Did

I hope all those who’ve made a career out of knocking the Mighty Arsenal are taking a good look at the Premier League Table.

We’re as high as Nigella and as happy as Wayne Rooney in a bingo hall. 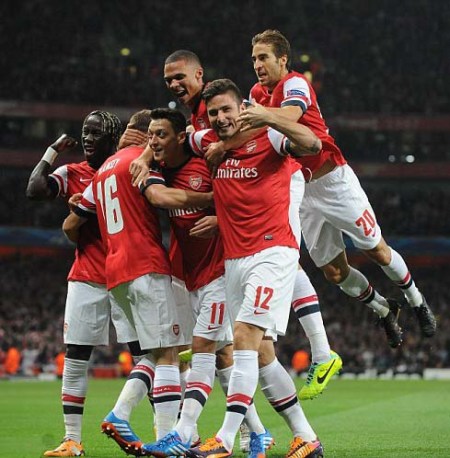 Not that I’m gloating… oh no… there’s a long way to go yet, it’s a marathon not a snickers etc etc.

But at the moment I think it’s fair to say that the squad is exceeding what most of us expected for this year.

The optimists among us hoped for a steady build on the defensive tightness and greater togetherness that steered us to fourth place in the second half of last season.

When we signed Mesut Ozil, maybe we dared to hope for a bit more.

But to be comfortably top of the table as we enter December? And to be nine points ahead of ManUre? And 10 ahead of the Tinies? I doubt any of us (apart from Terry Mancini Hair Transplant) would have wagered much on us doing so well.

Which raises the question of WHY?

Why have we shown not just incremental improvement on last season, but a genuine step change in confidence, quality and – most important of all – results?

There are many individual factors we can point to: the emergence of the Welsh Messi as the best player in the Premeirship; the exceptional form of our Pole In Goal; the precision of Ozil’s assist-making; the superb organization of our back four…

But I think Arsene Wenger gave us the real answer last week when he pointed out that this year, unlike the two previous years, we have not taken the Good Ship Arsenal on a new footballing voyage with a big hole below the waterline.

Le Boss said the clear difference this time round was that we did not lose a star player on the eve of the new campaign.

It meant we started out with the same group of players who had done so well from January to May – and threw a genuine superstar into the mix for good measure.

Contrast that with the two previous years.

The summer of 2012 was spent with Brave Sir Robin trying to pretend he was undecided about leaving but finally walking out on the club that paid his wages through so many interminable injury periods. The little boy inside him turned out to be an ungrateful little twunt.

Twelve months earlier we lost Cesc Fabregas to Barcelona (a move, admittedly, that came as a surprise to no-one); but then the unlikeable little Frenchman Samir Na$ri decided he wanted to line his wallet and started touting himself round  clubs with deep pockets, ending up at Petrodollar City.

Both those disrupted summers led directly to disjointed and disappointing starts to the new season. While other teams went off at a sprint, we set off on those season-long races with an open parachute strapped to our back.

We were forced to try and bed in new signings who, in most cases, were completely new to the Premier League; we had to work out new formations to suit the new personnel; we had to turn players from strangers into team mates and heaven only knows what psychological damage was done to the rest of the squad by the fact that our best players had made it clear they wanted out.

Somehow, miraculously, Arsene managed to maintain our membership of the Top Four club by the end of both seasons – but it was certainly no thanks to the Dear Departed.

And looking at how we’re doing now it makes me really angry about those players who left us in the lurch – yes, even Cesc (although BSR and Na$ri were more selfish, disloyal and narcissistic).

Van Persie and Nasri could have made their intentions clear to the club at the end of their last seasons with us. Their leavings would still have been a loss but at least the fans would not have been led a merry dance all summer long and the club and squad could have started rebuilding sooner.

I’m not suggesting we would have had glorious seasons if they had not left but – like Arsene – I feel we would have done a LOT better. We might have fallen short of winning the league, but we might well have been in the mix for longer instead of having to play catch-up with the skinny cock brigade.

The Arsenal revival we’re witnessing this year might have happened 12 months earlier. It’s the very success we’re enjoying now that highlights just what those players who left really cost us.

It’s naïve to expect players to show loyalty and I’m sure many fans take the view that if they want to go somewhere else for more money or a better chance of glory, who can blame them?

I can’t share that laissez faire view. I remain a dinosaur. I expect the adulation and support I give to the players to mean something, even in an age when the youth squad are driving Porsches and earning more in a month than most people do in a year.

And so Van Persie, Nasri, Fabregas: je t’accuse! YOU caused us to have disastrous starts to the past two seasons; YOU gave ammunition to the silly Wenger Out campaigners; YOU stopped us being in a position to fight for the big prizes; YOU hurt us. And WE won’t forget.

Although Cesc can come back if he wants 🙂

This entry was posted on Monday, December 2nd, 2013 at 9:33 am and is filed under Uncategorized. You can follow any responses to this entry through the RSS 2.0 feed. You can leave a response, or trackback from your own site.

192 Responses to Now We Can See How Much Damage Van Persie, Cesc and Nasri Did