Another great game of Football?

Big night ahead. Can we really beat last season’s finalists at their massive ground?

There will be 80+k fans in the Signal Iduna Park including two of our very own AA’ers and very excited they will be!

Given the manner of our home defeat there is cause for cautious optimism – I really believe we can get something from the game. Two silly defensive mistakes cost us the points and we can be sure the Welsh Messi will not try and dribble his way out of trouble in our area again.

So – we have seen why Dortmund are so highly rated but they have seen why we smashed Napoli and the Scouse. Both teams will have respect for each other after the excellent game at THOF.

Dortmund:  As I gave a breakdown in my last BD post it seems superfluous to repeat it, but I must make mention of Lewandowski. One chance at THOF and he scored, a 16 minute hat-trick on Friday, 12 goals from 14 games so far this season, the man is on fire – the chances of his coming to THOF in January are almost non-existent.

But is he as good as Ollie Giroud? Could he execute that flick to Wilshere in the goal of the month? I don’t think so.

Another major threat is Marco Reus. Now here is a bloke who should be playing at THOF. Left sided attacker, 20 goals in 43 games for BD and 7 in 17 for Germany, 24 y.o. – perfect. Apparently Man Utd are trying to buy him, but who would want to go to that flea-pit when he is already at a bigger and better club? 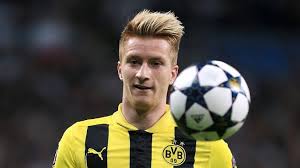 Must be windy in Dortmund

Klopp has been very complimentary about both Mr Wenger and Arsenal. Stating that he should be Sir Wenger and that AFC have been the best English football team over the past 10 years, maybe he is shovelling it on in case of defeat, but who knows  perhaps Klopp is sincere.

Arsenal:  Once again we have to talk injuries; Jack and Gibbs are out though thankfully we have excellent replacements. The absence of Flamini and the long-term absentee Theo are less easy to accommodate. Away in the CL is just where these two flourish.

My concern tonight is lack of pace on the counter. On Saturday we saw Ramsey lead a counter-attack but the defender outran him and AR was forced to turn and pass back to an oncoming player. If Theo had been there then  ……..

A major plus is the return to fitness of Santi. I love this bloke,his imagination is boundless.

A repeat of Arteta’s fine game at the weekend and another lesson in hold up play from OG will be the keys to our success.

We are still struggling for attacking options from the bench, hopefully Gnabry is fit enough to travel.

The team showed on Saturday a determination and work-ethic which will hold us in good stead tonight. If we manage to press BD higher up the pitch we can do well tonight and given some luck and the run of the ball and a decent referee, then we can bring him the points. Why not?

BR will be wearing a red jacket & Micky a red and white scarf – in case you are looking for us!

p.s. Mickydidit and I will be your foreign correspondents at the stadium as, thanks to Chas ,we have tickets for the game. No doubt we will be full of bratwurst, sauerkraut and Lowenbrau as we look down upon our heroes.

For most games Peaches has the armchair fans in her pocket as she cheers on the lads, tonight I can return the favour. Photos will be taken but probably not uploaded to the site until Friday.

This entry was posted on Wednesday, November 6th, 2013 at 9:29 am and is filed under Uncategorized. You can follow any responses to this entry through the RSS 2.0 feed. You can leave a response, or trackback from your own site.

208 Responses to Another great game of Football?