Every Arsenal game is something to cherish but every so often one comes along which brings a spring to the step – tonight is such a game. A stylish Italian team, 2nd and unbeaten in Serie A with a new and highly successful manager, a €35m player whom we tried desperately to sign but who chose (understandably) to follow the money, and at home on an Autumn evening.  Jumping Jehosiphat, I wish I was going.

Before I go into meltdown about the quality of Napoli it should be recalled that …. Yes, they beat Borussia Dortmund (which was magnificent) but we won away at the team who beat them in the CL Final – and I guess that is our running flush to their four of a kind.

Where to start? Mr Wenger much admires many of this Napoli team; starting with a dwarf named Insigne. The little fellow impressed at the Emirates in summer leading to paper talk linking us with him (AW said “we know a lot about him,” which translates into “we tried to sign him”). Smaller than Jack Wilshere, he stands 5´4″ in his boots but has real creative talent, Hamsik is their Ozil with the highest number of assists. But it is  Higuian who will attract today’s attention. Will the Boards reluctance to match Napoli’s bid come back to bite us? We shall see but I am quite happy with our own centre forward.

Benitez has had a flying start to his Napoli career. After a torrid but successful season at the ingrate Chavs he has found a club willing to back him financially and it is great to see such a decent man flourish. I wish him well apart from the two AFC games.

Will Benitez set his team out to play on the counter-attack, after all it is the way he played with both Liverpool and Chelsea and, come to think of it, during his disastrous time at Inter Milan. So, I guess the answer is , Yes. Parcheggiare il autobus? Unlikely but not impossible.

How will we play tonight?

In recent times Arsenal have been more comfortable allowing the opposition more possession. This could be tactical in which case what has changed? Is it that the purchase of Ozil’s remarkable passing ability allows us to be more potent on the counter? Or is it that the team has learned to sit back and take a breather when not on the ball? With the plethora of games it would be understandable that we do not play at breakneck speed for 90 minutes.

Rosicky is back in the squad which is great news given the injuries to Pod, Theo and Ox. I hope he starts tonight but it may be a game too early, in which case Gnabry will get a third start in a week. 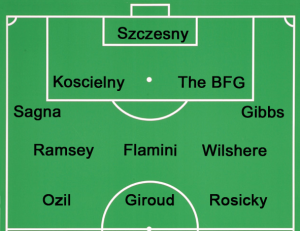 I love that we can win games with just one out and out forward – it must be Mr Wenger’s dream.

The bench is starting to regain some strength and I expect to see Nik B get a run tonight should we be tied at 70 minutes. The Monreal solution works well as we look more secure in the final minutes with him on the pitch.

Given that Napoli are unbeaten in Serie A , BD are top and unbeaten in Bundesliga, Arsenal top of the PL and Marseilles just a point behind the leaders of Ligue 1, Group F is without doubt the best group in the CL –  on form probably the best and hardest in CL history. There are often 3 good teams but never 4 with such quality. If we get through it will be a major achievement.

An exciting game in prospect.

This entry was posted on Tuesday, October 1st, 2013 at 9:31 am and is filed under Uncategorized. You can follow any responses to this entry through the RSS 2.0 feed. You can leave a response, or trackback from your own site.

184 Responses to Can Arsenal keep Naples & Higuain at Bay?