Arsenal Serge to the Top.

Who would have guessed that not so long ago this game would have been thought of as one for the purists? Not me. But that was how it was billed and rightly so as Swansea are a fine footballing team, this generous complement only works, of course, because Arsenal are an even better footballing team.

That said, we had to go through the ringer to prove it because that was one of the most nail biting games I have had to suffer in a while, but win we did, and three valuable points were brought back to North London and if that wasn’t good enough, results around us couldn’t have gone better if we had fixed them the night before: Manu and City losing, spuds and chavs drawing, what, somebody pinch me?

Onto the game, we were poor, well more precisely the attacking part of our game in the first half was poor; Swansea looked far more threatening going forward and I will stick my neck out and say that they had better quality attackers than we did. Michu, Dyer and Routledge are better than Giroud, Wilshere and Gnabry. Fortunately our defensive unit was in superb form and dealt with everything that Swansea threw at us.

We were getting nowhere fast, gone were those beautiful passes by Ozil into space for players to run onto when he first arrived; the kind he played week in and week out to Ronaldo at Real, these gems had to be abandoned as none of our attackers were capable of making the runs or in Giroud’s case, capable of controlling the ball well enough, this forced Ozil to have to try and beat more men than I am sure he would have liked which often led to him being tackled and losing possession. Some have criticised him, not realising, in my opinion, that circumstances forced him to play that way.

And then, just before half time, it happened, like a shaft of bright light shining through a thundery sky, Gnabry, clearly fed up being on the wing, answered the question of where he plays by making a powerful run through the middle, passing at least three men before laying of a perfect ball for Giroud — who wasted it. This was it, Gnabry had arrived, he is not a winger he is an Aaron Ramsey; people used to refer to this kind of player as a Steven Gerrard but that seems soooo passé now. 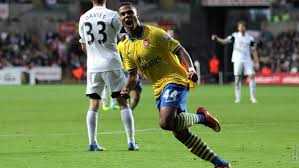 Gnabry started the second half with a new found confidence; he never got chastised for moving into the middle so he tried it again a few times and it worked, he also impressively started tracking back and then to make his day just about as perfect as it could get he scored his first goal for the Good Guys. It was pretty much the only way we were going to score: a slow build up made up of accurate passes, enabling us to find a way around the Swansea defence to set up someone with a goal scoring chance; on this occasion it fell to the young German .

Serge took his chance well. With a goal to the good it forced Swansea to take more risks in their pursuit of equalising which in turn gave us a lot more space and the possibility of hitting them on the break, which is exactly what we did. Within five minutes of going ahead we had a golden opportunity to score again through Ozil, unfortunately he missed but that just set the scene for Ramsey to save the day again. I have run out of meaningful superlatives and it isn’t even Christmas. The man is a goal scoring machine. Brilliant, absolutely brilliant. 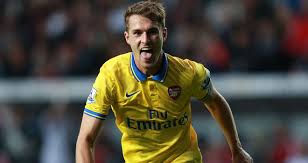 The game looked like it was just going to peter out with Arsenal cruising to the finishing line but a well worked goal from Swansea put pay to that, it was up off the sofa, pacing in front of the telly time.

We got there of course and with hind sight I can now see how well Wenger managed to deploy his limited resources. Wilshere and Gnabry are not wingers and that is why I was so bold above to suggest that Swansea had a better quality attack. But needs must as they say; would this game have been the same with a fit Arteta, Cazorla and Walcott available? No it wouldn’t — we would have crushed them.

Lastly, I would like to show some respect where respect is due: after the Aston Villa opening game debacle, when many Arsenal supporters including some on this site where still questioning such things as the harmony between the management and the board; Wenger’s ability or inability to sign big money players and the most hennas, “spud envy” pointing far too respectfully at all the new signings being made in N17. Well, while this sea of excrement was going on one loyal blogger on this site stood firm and put his money where his mouth was and bet that Arsenal would be top of the League on October 1st.

Szczesny: top game, plucked everything out of the air and did well when needed to get down. There was an incident in the first half but look at the back pass and you will see who is really to blame. 8

Sagna: Wenger must have promised him big things as he is playing better than he ever has. 8

Mertesacker: So, so good, so calm, so commanding I really want to give him the MOTM but for their goal. 8

Koscielny: Another solid display from the other half of our amazing centre-back pairing 8

Ramsey: I can’t think of anything else to say, MOTM. 10

Flamini: hands up all those who thought he would be able to keep Arteta out of the starting line up when he was re-signed? Not me. He is getting better and better every week. 8

Wilshere: playing wide left is obviously not ideal but he did what he could. 7

Gnabry: I thought he was a waste of space, it was if Arsenal were playing with a man short – and then he made that run. Things will never be the same. 7

Giroud: a difficult day for Ollie, his inability to hold the ball and beat a man will lead to a “Super Quality” signing coming in and ultimately taking his place. 7

Ozil. The honeymoon period is still in full swing. I just can’t wait until Cazorla returns. 7

This entry was posted on Sunday, September 29th, 2013 at 10:07 am and is filed under Uncategorized. You can follow any responses to this entry through the RSS 2.0 feed. You can leave a response, or trackback from your own site.

116 Responses to Arsenal Serge to the Top.