Bale’s A Proven Diver: Why No Fuss?

Against West Brom recently Santi Cazorla was fouled in the opposition box and went down. We scored from the resulting penalty. 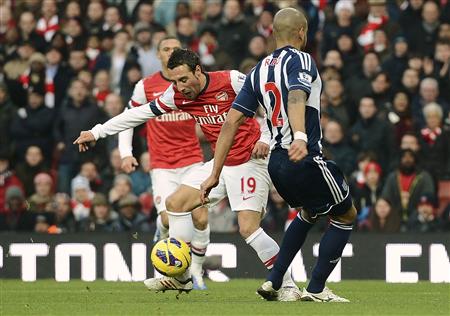 But that did not stop the media going into a frenzy about our little Spaniard’s alleged “cheating”.

The story ran for days – including calls for retrospective banning – and was a foul slur on an international performer who plays the game fairly.

Of course it was no surprise to us Arsenal supporters. We had seen the witch hunt perpetrated against Eduardo following a Champions League game versus Celtic shortly after his return from a (literally) shattering leg break. Eduardo may or may not have dived in that case, but the outcry was out of all proportion to any other diving incident in football ever.

Now fast forward to the Saturday just past. Tottenham’s winger Gareth Bale was booked for diving after what was, at best, minimal contact from a Sunderland player. Bale had reacted to the contact by hurling himself to the ground.

Here’s the remarkable thing: it was Bale’s FIFTH booking for diving since the start of last season – three more yellows for simulation than any other player in the EPL, even Ashley Young!

We know that referees get things wrong from time to time, but five bookings for diving can’t be explained away by officials’ errors. It quite clearly points to a player who uses cheating as a weapon in his armoury.

And let’s not forget, those are only the occasions where Bale’s dives have been penalised. There are many other examples of dives that have gone unpunished by the refs. Often they result in a free kick or even penalties to Tottenham (as we have found to our own cost).

So we see that Bale is a proven cheat of a player. Someone who, while undoubtedly a talented footballer, has been shown up repeatedly for his dishonesty.

And against Sunderland he took his tally of bookings for cheating up to a shamefully high level.

With that in mind, I expected the Sunday sports pages to contain a barrage of articles demanding that he be banned for a long period, that he be made to apologise publicly, that his manager be forced to condemn diving and so on. Or at least some earnest debates about morality in the modern game.

Lo and behold, what did I find?

Match reports that barely mentioned Bale’s booking and did so exclusively in the context of the Welshman’s claims of being persecuted; and – most ludicrous of all – articles suggesting he would be “hounded out” of English football “like Cristiano Ronaldo” if referees kept targeting him in this unfair way.

So please, Dear Reader, answer me this: why does the media seek to make English football’s most proven cheat appear as a persecuted victim, yet sets out to crucify any Arsenal player against whom there is the slightest allegation of diving?

I can’t fathom it.

Perhaps it’s that Bale (unlike Eduardo and Cazorla) is British and the British media seldom take to task home grown players for blatant cheating and foul play (Ashley Young, Rooney and Gerrard all have extensive “previous” for simulation, but are never demonised by the press).

Or maybe it’s just that the reporters have put so much effort into building up Bale as the next big thing (despite his stats being not as good as Theo Walcott’s) that they can’t bring themselves to acknowledge a glaring flaw in his approach to the game.

This entry was posted on Monday, December 31st, 2012 at 9:35 am and is filed under Uncategorized. You can follow any responses to this entry through the RSS 2.0 feed. You can leave a response, or trackback from your own site.

263 Responses to Bale’s A Proven Diver: Why No Fuss?