Santi gets his Claws into Reading

Nobody seemed prepared to predict the outcome of this one. Would The Arsenal rise from the ashes of the funeral pyre built and torched by the press since the Valley Parade debacle or would they produce another Xmas turkey of a performance?

The line-up seemed bright and attacking with a Pod, Theo, Ox combination up front. Mozart couldn’t find a space on the Conductor’s stand with Santi set to continue baton duties. The bench looked strong with Giroud and Koscielny returning after visiting Abou.

Arsenal began the first half in threatening mood. Chamberlain broke away in the 2nd minute, fed Santi then cheekily took the ball off the Spaniard’s toe before unleashing a fierce drive. The first five minutes were all Arsenal with only a key pass in the final third missing.

A superb cross from the Ox needed Podolski to attack the ball. This was one of the few occasions where Arsenal didn’t attack the ball coming into the box which later became a feature of tonight’s performance. Some poor defending was followed by a swift break resulting in a Podolski shot which was blocked.

Reading won a corner on 11 minutes and the deficiencies of zonal marking were clearly exposed as the Reading player attacked the ball and got in front of the static Arteta. Arsenal responded with some fine passing play. The ball went wide to Podolski who slipped the ball on to Gibbs. Podolski continued his run into the area and controlled the ball with his right on to his left, bang. Arsene and Bouldie still looked less than happy. Mind you, you can understand that after the slaughtering they’ve had this past week.

Cazorla suddenly looked back to his early season form, spraying the ball around and taking pot shots given half a chance. A move involving a particularly delicious through ball to Gibbs breaking down the right, ended with another Podolski effort screwing wide of the goal.

The 21st minute gave Theo the chance to confirm and consolidate his claims to play up top, but he fluffed his lines allowing the Reading keeper to block. At the other end Sir Chez was catching the ‘impossible corners to defend ‘ from Shorey and as a result gave his defence some much-needed confidence.

Arsenal were now slipping into turbo with a great run from The Ox and a Wilshere shot after a bout of pinball in the Reading penalty box. A vague threat from the home team was snuffed out by Vermaelen and Gibbs got in a fine block. Theo found Cazorla at the far post and yet another block meant that Arsenal couldn’t capitalise on a period of virtual total dominance.

A second goal was required to cement Arsenal’s superiority and it duly came in the 32nd minute. Podolski took on his full back (what a lovely sight, that is) and sent in a great cross, Santi stooped to head into the net for a lovely goal. Late runs into the area and players getting on the end of crosses, whatever next. 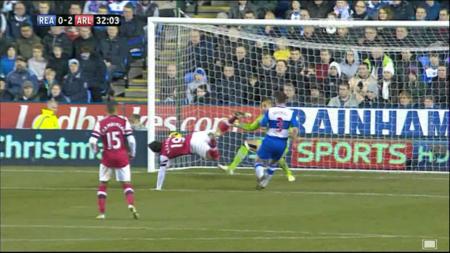 A relatively uncommon sight then became the norm as Arsenal now oozed confidence. The third goal came down the right with Theo shifting the ball to give himself space to cross to Gibbs on the back post, arriving late again. Gibbs headed back into the danger zone and Cazorla swivelled to put the Gunners 3 up and cruising.

Jack’s Christmas celebrations may have to be put on hold for a few days as he received an early present of crushed nuts from McAnuff in the 39th minute. There was no malice in the challenge but studs into the groin in December are sure to make the eyes water.

The first half came to a close with an Ox run, some excellent interplay from Gibbs, Wilshere and Walcott and nearly finished with an Ox headed goal from a Sagna cross.

The second half began brightly but Arsenal’s spark seemed to dwindle as the intelligent movement off the ball started to diminish as that horrible casual ‘job done’ streak crept back into our play. We were still creating some chances though, with Theo slipped in by Jack and Santi unlucky not to latch on to the rebound.

A few minutes of Reading revival saw some good command of his area from Szczesny and the BFG was reminiscent of Beckenbauer at times with his calm interceptions and beautifully timed tackles. Even then, Walcott had another great shooting opportunity but the ball went wide.

What we needed was another goal and that’s exactly what we got after more sharp play, Jack to Podolski and a tap in for a well deserved hat trick for the man from the North Pole.

Theo had a chance to make it 5 but shot straight at the keeper. Then came that moment we all dread as Arsenal fans, coasting at 4-0, Gibbs played a risky ball infield to Wishere, Jack slipped and Reading scored. Only a consolation said the commentators, but you never know.

Arsenal’s foot was well and truly off the pedal by now. If they keep the tempo up it takes the pressure off, relax and even a team whose form is as poor as Reading’s sense some uplift. The second Reading goal was utter garbage from the Gunners. The commentators delighted in reminding us of the day Dowd engineered a Geordie comeback. The options for the man on the ball had dried up and nobody was willing to kick a few backsides.

On 74’ the Ox was subbed for Ramsey. The Ox had been non-existent in the second half. Complacency? Tiredness? I’m not sure but after a fine first half it was disappointing. Bacary looked half-hearted at times going forward then with little effort to get back when the ball was lost. Passes were going backwards in our own half as if we didn’t know whether to stick or bust.

The 80th minute saw my personal prayers answered with a brilliant piece of play from Cazorla and a fine finish from Theo. Theo’s pistols were finally discharged into the Reading net and we could breathe a sigh of relief.

A round of substitutions, a Podolski blast and a near thing for substitute Giroud saw the game out for the Gunners. The BFG had time for one last majestic interception and Vermaelen got back well when the Reading player took a fraction too long when clean through.

All in all, a fine way to go into the festive period.Reading weren’t very good opposition but you can only beat the team in front of you, so upwards and onwards to a lunchtime date with Wigan. I’m looking forward to going already. Please can we play like we did in the first half for the whole 90 minutes. Please.

Santi took the ball home after a fine hat trick and man of the match performance.

Mertesacker – Majestic. Calm and assured, admittedly against a limp attack……8

Vermaelen – Much better from Tommy after his Yorkshire nightmare……7

Sagna – Got forward well, looked a little slack 2nd half and seemed to be arguing with TV5 at the final whistle….7

Gibbs – Supported Podolski really well in the first half. His two assists were balanced out by a poor pass to gift Reading the glimpse of a lifeline. …..7

Wilshere – Jack was excellent in the first half, then seemed to stop showing for the ball once the team believed they’d already won  …..8

Cazorla – Magnificent and back to his best with a deserved hat trick …..9

Podolski – Much much better from Lukas. Took his goal superbly and looked dangerous on the left flank with two assists…..8

The Ox – Great first half. Perhaps he tired in the second. Lovely to see him build as the season progresses…..7

Coquelin – Brought on to give Santi a standing ovation …..7

This entry was posted on Tuesday, December 18th, 2012 at 9:26 am and is filed under Uncategorized. You can follow any responses to this entry through the RSS 2.0 feed. You can leave a response, or trackback from your own site.

132 Responses to Santi gets his Claws into Reading