Two draws followed by a painful home defeat. How will Mr Wenger react to this poor run of form? He will send out a second rate team and pray for a draw.

We saw in the home leg how good Olympiacos are and they have a 100% home record in the Greek Super League. which they lead by 10 points.  On that rain-soaked night in October we struggled, particularly in the first half when Olympiacos showed why they are Greek Champions. We eventually won 3-1 thanks to a good performance from Gervinho and a lovely Ramsey finish in the final seconds.

This is an important game for Olympiacos who will be eager to achieve a Europa Cup place, and with Montpelier taking on Schalke they must be favourites. Add in the noisy and colourful home fans plus our 3-1 loss last season in a similar situation and you can appreciate my concerns. For once, BR thinks Arsenal will lose.

Would losing be costly? If Schalke win first place is beyond us and I believe they will win in Montpelier, so we are likely to finish second. Not really a problem. But at what cost to the morale of the team, is it in their interest to be sent out as lambs to the slaughter? Is it sensible to have young players remember that the first time they played in the first team they lost? Trouble is, the resting of the first team is more important than winning tonight, it is the reward for early qualification.

With Rosicky coming off the bench on 60 mins, and some young fresh legs to replace Gervinho and Ox.

Today’s explorer: Darwin’s mate let us down at the weekend, let’s hope this chap brings better luck. Francis Light (1740 – 1794). Founder of Penang, Malaysia. Born in England, his father was unknown but he was lucky enough to be taken in by a wealthy aristocrat who had him educated as a naval officer (oh yes ….). For 10 years Light travelled around the Far East being based in Phuket (nice work if you can get it) before leasing Penang and developing Georgetown.. BR has spent many a happy hour in Penang so thank you Mr Light. 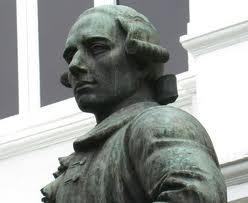 It would be wonderful if tomorrow we were writing about the fighting spirit and never-say-die attitude of the team. We may not win but make us proud boys.

This entry was posted on Tuesday, December 4th, 2012 at 9:37 am and is filed under Uncategorized. You can follow any responses to this entry through the RSS 2.0 feed. You can leave a response, or trackback from your own site.

261 Responses to Olimpiacos and other Narratives