Arsenal: Reasons To Be Cheerful

We are living through troubled times as Arsenal followers these days.

Two-goal leads should be precious, closely-guarded things but our grip on them at the moment is about as secure as Nicky Bendtner’s trouser elastic.

Mid table teams used to come to the home of Arsenal with trepidation in their hearts, knowing that if they had the temerity to threaten our goal they would get badly gored by a raging Adams, a rabid Keown or a berserk Bouldie.

Now the only risk they face in our penalty box is loneliness, as they’re left to stand there all on their todd, cleaning their fingernails and humming pop ditties until someone sticks the ball onto their boot or bonce.

In such circumstances it takes a very special Gunner to not be disheartened (actually, we’ve got one – he’s called Terry Mancini Hair Transplant and you will meet him later on in the comments if you choose to linger).

So, tempting though it is to reel off a long list of grievances, today I want to highlight a few positive thoughts about our predicament.

You might call it clutching at straws. On a mountainside. With a thousand-foot plummet to certain death waiting below.

You might call it rose tinted glasses. Tinted with the tears of blood I have been crying lately.

Or you could just take it in the spirit it’s intended and, for a few minutes at least, look on the bright side. 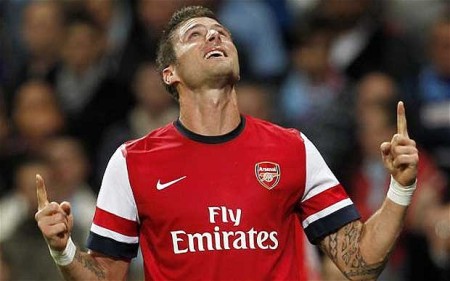 Right. I know that lots of you will want to have a moan about all things Arsenal today (nothing wrong with that), but how about this for an idea: before each comment containing criticism (of the club, of players, of the manager, of the coaching, of the fans), why not start with one positive or hopeful thought. One sliver of something positive that you can see in among the murk of despondency.

This entry was posted on Monday, November 12th, 2012 at 9:35 am and is filed under Uncategorized. You can follow any responses to this entry through the RSS 2.0 feed. You can leave a response, or trackback from your own site.

196 Responses to Arsenal: Reasons To Be Cheerful