Do you remember the game against Liverpool when young Theo slalomed his way from our own half past what seemed like the whole of the Liverpool team to set up the late equaliser? Tell me you weren’t jumping up and down when that was happening?

Do you also remember a similar run against Milan in the San Siro? Could we really live with ourselves if he moved and started producing runs like that on a consistent basis for someone else? Or worse, could we live with ourselves if he moved and had the opportunity to play more centrally and started scoring for fun. There is little doubt in my mind that he is a better finisher than Gervinho. One on one, it has to be said that Theo is quite clinical. He scored 12 goals last season, set up untold amounts of assists for BSR and yet many Arsenal supporters remain unhappy with him. 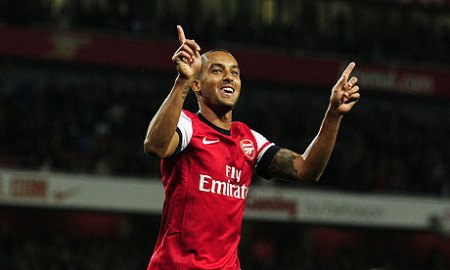 In fact, I would say that the last time all Arsenal faithful were united in support of Walcott was when Chris Waddle accused him of not having a football brain. Does that description above bring to mind a player without a football brain? What does that expression mean anyway? My interpretation is that he acts like a puppy with a ball more often than he should; that is to say, when he is moving at speed and the ball is played to his feet he either trips over it or runs past it, both are characteristics of a puppy to my mind.

However, play it in front of him into open space and that is a different story – few are better. But, as we all know, open space in the EPL is a rare commodity, far more teams come to the Emirates and park the bus than arrive with the intention of attacking in an attempt to win that way. We have seen it a thousand times before, teams park the bus and try and hit us on the break. The latest frustration we have to suffer is goal keepers still wasting time even when they have gone a goal down. Someone tell me how does that work?

The most sensible view is surely that it is better to have Walcott than not to have him. Hhhmmmm, or is it?  Would we be better of without attackers such as Arshavin, Chamakh and Walcott eating up valuable wages and replace them with one proven out and out goal scorer?

This entry was posted on Friday, September 28th, 2012 at 9:29 am and is filed under Uncategorized. You can follow any responses to this entry through the RSS 2.0 feed. You can leave a response, or trackback from your own site.

226 Responses to Should Arsenal Sell Walcott?