I love the late summer CL fixtures. Warm nights and the opportunity for fans to watch decent football midweek.

Our first game is challenging – playing the French champions even sans OG will be difficult. A compact ground filled with 33,000 fervent fans awaiting  (what I believe will be) their first CL game.

Montpellier: I have to admit to knowing almost nothing about Montpellier HSC. I have been to the town and didn’t even know they had a club! We all know about their fairy tale La Ligue win last season but beyond that? Mbiwa, the captain is much admired and it is unlikely he will be at the club next summer.  Another player known to English fans is John Utaka who was signed by Portsmouth in 2007 for £7m and given a wage of £80k a week …. yes, you read that correctly! More than Theo is being offered in 2012!! You will not be surprised to read that Utaka was signed by a man who has a Rosie account. Montpellier’s most famous ex -player is Eric Cantona – shame he couldn’t make it in the English game.

The night’s talking point will obviously be the return to Stade de la Mosson of Oliver Giroud. It will be a special night for him and I expect OG to mark it with at least one goal.

Montpellier’s form is poor. They have won just one of five games in La Ligue, the latest resulting in a 3-1 loss away to Reims. 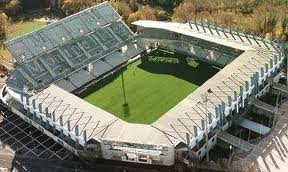 Arsenal: There are so many possible permutations of the team tonight but I will start at the back and with our ‘keeper. Mannone will play due to an ankle injury to TPIG. It would have been interesting to see which GK would start had TPIG been fit.

The Corporal has been outstanding, an astonishing improvement in one so young and inexperienced. He isn’t the finished article yet but he deserves to keep his place. Centre back is not so simple;  Mertsacker is quality but Koscielny is too good to leave on the bench. I would play Kos tonight and Per on Sunday when it is likely Djeko will start.  Despite Gibbs improvement, I would prefer to see Santos start tonight. He is a better crosser (Gibbs must keep practicing) and OG needs something to feed on.

Midfield is also difficult to predict. My choice would be Coquelin, Cazorla and Arteta..  Diaby’s height will be important on Sunday – no risks should be taken with our fragile Bambi – and Coquelin is an able deputy who performed very well on Saturday. However, Ramsey ‘s vibrant substitute cameos are evidence of a player in good form.

Upfront we finally have options. The Ox is likely to be rested having played 2 Internationals and on Saturday. Assuming Giroud starts, The Gerv will not play centrally, so I expect the team to line up like this: 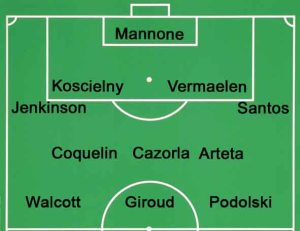 Mr Wenger usually likes to get the 2nd round qualification achieved as soon as possible and as such I expect him to play our strongest team despite the difficult fixture on Sunday. For once, playing Tuesday will help us.

I was going to write a “where are they now?” feature for this season, it is on the back-burner at the moment but here is a taster. This gentleman is currently living in sunny Malta and owns a pub….

Fashion can make a fool of Heroes

It is hard to know what to expect of Montpellier, they could be excellent and win the group or be whipping boys. A poor start to the season does not mean that Montpellier are a poor team (AFC 2011) and tonight will be one of the biggest nights in the clubs history, they will be playing in front of a full, expectant stadium and be desperate to start their CL campaign well.  Should be a good game.

This entry was posted on Tuesday, September 18th, 2012 at 9:28 am and is filed under Uncategorized. You can follow any responses to this entry through the RSS 2.0 feed. You can leave a response, or trackback from your own site.