Do We Play Ryo Miyaichi or the Twitter Flavour of the Month Next Season? 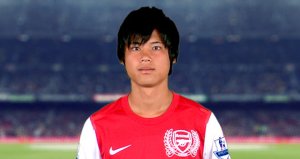 We need Eden Hazard, Yoann Gourcuff, Mario Goetze, some other player playing in the French Ligue 1/Bundesliga who I’ve never really seen play, but a lot of people are talking about him on Twitter so I presume we really need him and am going to get really angry about it when Wenger doesn’t splash out £50million on him in the summer.

Of course, these were more than likely the same people who booed Andrey “established star who cost a few bob” Arshavin off the field when he was replaced by Alex “oh bloody hell another kid who cost us a small fortune” Oxlade-Chamberlain at the Emirates against Manchester United.

Now before you worry, this isn’t another pop from a blog at Arshavin. I am very fond of the Russian and do hope that if he can’t find form at Arsenal, he will somewhere else (in a different league) because he is a joy to watch. No, no, this is about the kids, and one in particular – Ryo Miyaichi.

Arsenal signed Miyaichi in January of 2011, and he immediately went out on loan to Feyenoord until the end of the season. In 12 games, he scored 3 goals and made a big impression there. At the time, a Dutch friend of mine told me that he was still raw but was an exceptional prospect. It was on such evidence that he was granted an “exceptional talent” work visa. Ryo was hyped up by Wenger when he signed for us, and again during last summer, but other than two short appearances in the Carling Cup, we saw nothing of Miyaichi. That was until he went to Bolton on loan.

Now, during the Fat Sam era I wasn’t a fan of Bolton, with their pedantic football and aggressive style. Things didn’t get much better under Gary Megson, but under Owen Coyle, Bolton are a decent side to watch, aren’t into the bully boy tactics, and as shown by Jack Wilshere’s successful time there, a good place for Arsenal to loan out some younger players to get some vital first team experience. Young Jack grew up a lot in his time at the Reebok, he was taken away from the comfy bubble of London Colney and thrust into a more no nonsense set-up at a mid to lower league side where everyone had to pull their weight.

The same has happened to Ryo, and he hasn’t even got the benefit of a few years at our academy like Jack had, which leads me to suspect Wenger may be tempted to give him a try-out in the Arsenal squad sooner rather than later. I’m not going to try and sound clever and pretend to have watched every game he has played for Bolton, but I do read all the reviews and in them, Ryo’s name pops up time and again. Reporters often claim he is Bolton’s most creative player, and often their best. In fact, he was voted the club’s Player of the Month for February by fans. His goal and 2 assists in just 6 games probably helps.

I’ve only caught highlights of Ryo play, but he is willing to take defenders on, and can whip in a fine cross. His reaction to Fabrice Muamba’s illness is also telling when it comes to Wenger’s favourite, his “mental strength.” At the time he was obviously and understandably shocked, this turned to a tear when Muamba’s name was chanted on the first game back at the Reebok, and that in turn turned to sheer determination to do well on the field. It is hard to know how he will re-act to playing in the famous red and white on a big night at the Emirates, but like with the Ox and any other youngster, there is only one way to find out – throw ’em in at the deep in.

I’m not much of a betting woman (lost €30 to Paddy Power during Cheltenham – so if anyone has any tips for the Grand National I’m listening) but if I were to harbour a guess, I can sadly see Arshavin and Benayoun leaving the club in the summer and Miyaichi given his chance to shine. That would give us the options of Miyaichi, Walcott, Gervinho, and Oxlade-Chamberlain out wide, and they all have one thing in common – SPEED!

So do we give Ryo Miyaichi a go next season, or some player we’ve never really seen play or heard of before Twitter told us we needed him?

This entry was posted on Wednesday, April 4th, 2012 at 9:33 am and is filed under Uncategorized. You can follow any responses to this entry through the RSS 2.0 feed. You can leave a response, or trackback from your own site.

116 Responses to Do We Play Ryo Miyaichi or the Twitter Flavour of the Month Next Season?