Our hubcaps? Have them, we’ve got the points.

Smash and grab, against the run of play, undeserved, call it what you want, Robin van Persie’s two superbly taken goals gave us a very important win at Anfield and with it three extremely precious points.

Buoyed by the glorious fight back last week against spuds I sat myself in front of the telly ready for the match with a greater confidence in my heart than had been the case in more recent weeks. But, continue where we left off last weekend, we did not, Liverpool came on to us with drive, and purpose; they, it has to be said were bossing the game – this lasted all of, well, exactly two and a half minutes, lol before the good guys collected themselves and started to play.

Although, it wasn’t pretty, not as pretty as last weekend: the passing wasn’t as crisp, the creativity wasn’t quite as ingenious but enough collective self belief remained to hold things together and that is in spite of having to suffer yet another totally unjust penalty being awarded against us.

Did you see the replay on the telly at the end where they put what seemed like a magnifying glass on the incident – never touched him, not a feather?

Still, today was the day when Szczesny had decided to be Man of the Match, up stepped Kuyt and across went Chesney’s hand, have another go Kuyt, hahahahah missed again. Did you see Vermealen’s celebration, if you haven’t take another look, passion or what?

No, Liverpool were not going to score today, it took one of our own to give them a leg up. I think it was a very dangerous game that Kozzer was playing; although, I am prepared to give him the benefit of the doubt when he said that he knew that by giving them the lead it would fire Arsenal into action, the same way as it did last weekend, fair enough Koz I am just glad you never tested us by giving them a two goal lead. Am I making too many references to last week lol?

The truth is we were disjointed, the three elements of the team, the defence, the midfield and the attack seemed unable to link up with each other, Song was poor — there I said it, Alex does have a tendency to start slowly but he is usually covered by Arteta, although, today he was miss placing passes which is completely out of character; Theo was having trouble getting past Enrique, and offensively Benayoun offered nothing which left van Persie isolated.

But, remember when the BFG got injured and many said that the ideal CB partnership was Koscielny and Vermealen, I was one of them, well, they were magnificent, my only surprise was what took them so long to gel as a unit. Gibbs helps as does Sagna who was outstanding for the full ninety minutes which brings me back to the game and our only attempt on goal in the first half.

Be honest now, when the ball was rolled out to Bacary on the right wing which one of you expected that kind of cross? Guilty, I didn’t, what a peach, the most perfect angle met sweetly by the Boy Wonder to head us back on terms just before the break.

As both teams took to the field for the start of the second half you could tell that Liverpool’s resistance had not yet been completely broken, there was something about them that still naively thought they had a shot at fourth place, they huffed and they puffed, they hit the post a couple of times but there wasn’t really anything too troubling.

The first significant incident came when they knocked Arteta out cold but just as I was thinking ‘you hubcap thieving bunch of banned words’, their supporters silenced me by giving him a standing ovation as he was carried from the field. That kind of behaviour may be rare in football today but nowhere near as rare as an appearance of a Lesser Spotted Diaby, a real collector’s item this was.

I happily admit I was excited to see him back and his first shimmy that took him effortlessly past a Liverpool player got the blood racing even higher, probably for the first time in the match we started taking the game to them. That’s not to say we started to look like we were going to score, we never gave that impression but it no longer looked like the only winner, if there were to be one, would be the Dippers.

But, as quick as the Lesser Spotted Diaby appeared he was gone, did I dream it? On came the Ox full of fight, at the end of the game I was left thinking that it was a tough call to decide who was more effective: Diaby or the Ox?

But either way it was getting towards the time when van Persie had a decision to make. Some may have noticed him around the ninety minute mark looking up thoughtfully, obviously pondering that all important question: do I want to score, because as we all know, ‘he’s Robin van Persie and he scores when he wants‘? 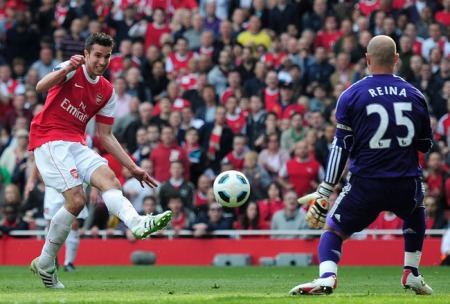 Robin decided he did, all that was needed was someone to supply him with the opportunity: enter the world’s best DM, that god like, lion of a man (a bit too much?) Alex Song sent in a chip that Fabregas would have been proud of for van Persie to rifle home. Comparing Song’s pass to Fabregas is, as we all know, high praise indeed but there is a higher being in the Arsenal pantheon, sit up straight, pay attention, deference is required, I am about to use the “B” word. The way van Persie guided the ball past Reina was Bergkampesque. The away supporters went wild and deservedly so in my opinion when you consider some of the disappointments they have had to endure first hand in the not too distant past.

Did I mention the chavs lost? Hahahahahaha.

Szeczney: as I have said, Man of the Match, commanding, powerful, intelligent, good distribution, he just gets better and better. 9

Sagna: one of his really, really good games, I expect a great deal from him defensively and he delivered, I don’t expect too much offensively so his cross that led to a goal was a really good surprise. 8.5

Koscielny: superb I thought, it is not easy playing against that diving little Uruguayan rat but our Kozzer stopped him scoring so, 8

Vermaelen: can’t play two games of ninety minutes in a week purleese, this is Thomas Vermaelen we are talking about here. 8

Gibbs: he is getting better isn’t he? I thought his major significance this season would be what he brought to the attack but I like the way he is going about improving his defensive game. 7.5

Rosicky: hmmmmm, not easy, he did work hard it must be said but the job of the person who plays in between Song and RvP is to produce magic and there wasn’t enough of it 7

Song: a very poor first half, ponderous, wasted passes, I thought ‘I am going to have to eat Peaches’ humble pie’…….nooooooooooo, what a pass, what a magnificent piece of football to help win us the game. 12

Walcott: oh why me? I don’t think that last week’s goals change anything, in games when teams are foolish enough to come onto us then Theo will excel but they are the tiny minority of a season, the majority play two banks of four and he has never once shown that he is capable of dealing with such a situation. Still not convinced 6

van Persie: the Boy Wonder can do no wrong 9

Benayoun: I wrote above that he offered nothing in attack in the first half and I stand by that but what I purposely left out, until now, was to say that he worked his socks off for the defence; he tracked back like a demon, covering Gibbs whenever necessary. 7

This entry was posted on Sunday, March 4th, 2012 at 9:49 am and is filed under Uncategorized. You can follow any responses to this entry through the RSS 2.0 feed. You can leave a response, or trackback from your own site.

221 Responses to Our hubcaps? Have them, we’ve got the points.