Arsenal brought together an array of legends to help them celebrate the history that is Arsenal, 125 years of history to be precise, from the days of Dial Square, Plumstead common, Henry Norris getting us into Division one after WW1, the Chapman Era, the 70’s double, moving in more recent history with George Graham’s titles and cups, right upto Wenger’s invincible’s and some of the best football I have ever seen.

With the statues that were unveiled on Friday, the talk of the Pubs pre-match, there was a feel good buzz about the place. 3 pivotal legends had been immortalised and all rightly so, but everyone I spoke to, believed there was a place for a Bergkamp statue.

Anyway into the ground, the fans trundled to see who had come to say hello, many legends from the recent history memory banks had come to join in with the celebrations, as Tom Watt spoke with Thierry, a rendition of “Sign him up” rang around the ground.

To the game, Everton were the sideshow to the celebrations, but as I said pre-match, the most important thing today was 3 points, so after all the fanfare could the players perform and focus on the job in hand? Everton after all were not going to roll over, always a worthy opponent, they work hard and give little away.

The only other worrying thing to consider before kick off was that Fergie’s rent boy was the man in the middle. Arsenal needed to add to the recent haul of 19 points from 21 and couldn’t afford to let Webb ruin our day.

It was a slow start and Everton were defending by holding a highline and pressing Arsenal, but this highline was breached on numerous occasions throughout the first half, but we failed to capitalise, if indeed we managed to get passed the razor sharp reflexes of the assistant referee who had his flag waving around throughout the game, did no one tell him the celebrations were all pre-match…………

The first real chance came about 15minutes in when Arteta, played a lovely ball down the inside right channel for Walcott to run onto, Theo unselfishly, but perhaps he should be more often?, anyway his pass was just a little too square, and it got between Gervinho and Ramsey, Gervinho managed to get control eventually, but the easy chance had gone by then…..

A few minutes later and Gervinho managed to break through from inside left, and he released Robin, but he seemingly had just strayed offside, a tight call, had the linesman put his flag down yet, I wasn’t sure. Everton got forward occasionally, but they failed to test Woijech, who collected or cleared any ball that came near him, his distribution was spot on.

On 29 mins, Song puts Ramsey through, the gap narrowed to the right, so he swivelled and curled a shot just over the top left corner.

Arsenal certainly were on top and looked like the only team trying to score, but we lacked a sharpness in front of goal and Robin was having a quieter than normal game. It was starting to feel like the Fulham game again. Although we were solid and didn’t look like conceding, it looked like we had as much chance of scoring as Na$ri does of playing Champions League football this season……..

Arsenal continued to dominate and had a flurry of corners, but still no break through, 3 mins of injury time and Saha unleashed from distance, but it didn’t test our young pole. Half time 0-0 and the party feel good factor was a little flat now….

Second half the game continued in the same fashion, about 5 mins in and Cahill loses his boot whilst on the attack, Webb stops the game much to the annoyance of Everton as that was a good break. Even funnier when Cahill threw his boot down in the direction of Moyes, as he left the pitch to sort it, who didn’t look happy.

Walcott was having a good game and getting plenty of the ball, but he wasted a good opportunity to get a strike on goal on about 55mins. Moments later and he drives forward and manages to bustle his way passed a defender and unleash a ferocious drive that Howard saves well.

On 60 mins, Baines, delivers a peach of a cross right to the far side to Cahill who is holding back and coming in late, but Vermaelen has smelt the danger and managed to get in between and head the ball clear, Szczesny praised Thomas. Cahill would have scored there, brilliant work by our Belgian Gladiator.

Everton take off Saha and bring on Distin, a point looks a good point to Moyes, although Neville puts the ball just over the goal on a rare Everton attack. As Arsenal continue to toil Wenger readies Arshavin and Rosicky.

But just before they come on, Song delivers what I can only describe as a perfect pass, that had Xavi done that, the press would be creaming themselves. As the ball came over from a diagonal right footed pass, the ball perfectly weighted and with a deceptive curve on the flight path as the ball spun in the air, it was watched down intently by Van Persie who got round the back of his marker, Jagielka, and on the volley, with both feet in the air, he lashed it with a precision strike across the goal and into the bottom right corner off the post with a hapless Howard, left looking like another statue…….Quiet game by RVP standards, but the goal was top draw……..Rosicky and Arshavin sit down….70mins  1-0…… 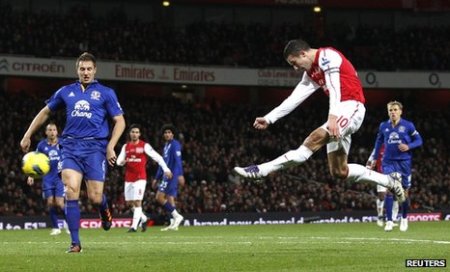 Rosicky came on for Gervinho who had a very quiet game and Miquel replaced Thomas Vermaelen who had taken a knock. Everton now started to push forward but really failed to test Woijech, Frimpong came on for Theo.

On 86 Gueye breaks free but shoots wide, nerves were starting to manifest. As we moved into injury time, McAleny a young 19yr old has a delightful volley from the left, and although Szczesny stretches long, it goes wide.

Game over and Szczesny kisses the left boot of Van Persie, as the day ends as it started smiles all round. Another moment in our 125 year history as Robin scores a truly sensational goal which will be up there with the best of Wright and Henry to name a few, I am sure they were impressed with that goal and its true beauty.

Szczesny: 7.5 Calm and assured, his distribution is getting better and better. Not really tested, but did his basics well.

Djourou: 5. Indecisive and prone to too many errors. Did ok in patches, but he worries me.

Koscienly: 8. Outstanding, strong and quick, reads danger well and snuffs it out, gets better every game. My MotM.

Vermaelen:8. Great game, played well at LB and gave Everton little space, his defensive header that kept out Cahill was amazing and kept it 0-0.

Song: 8. Strong and powerful, ran about breaking up attacks, continually looking to get players through and pick them out.  His pass for Robins goal, was almost as good as the goal itself.

Ramsey: 8. Works and doesn’t hide, makes the odd mistake, but works hard to make up for that. Needs a goal and deserves a goal. I read on one website, Ramsey was deemed the worse player on the pitch, complete pony; he was very good and close to MotM for me. How anyone can berate him is completely beyond me…….

Arteta: 7. A quiet game today, but still looked the part, a few more than normal wasted passes, got confused perhaps with his old team mates.

Gervinho:6. Added little to the team today, woeful up front and loss the ball way too many times. Very frustrating at times.

Van Persie: 7.5. Was probably a 6, but that strike was amazing, simply sensational. You could argue giving him MotM for the goal, but equally Vermaelen stopped a goal been scored against us.

Frimpong:. Only on the pitch for 3 or 4 minutes.

Mr Wenger: 8. Has the team working hard for each other and showing real promise. Has his favourite line up, but it is hampered by his injured fullbacks. Subs at the right time.

A hard fought contest, but we got three points, from a solid team performance. Which like many games this season, we all feel we would have probably lost last season? Wenger really has turned this team around and ok its top four till Chelsea play, but we are in there on merit…..

This entry was posted on Sunday, December 11th, 2011 at 9:57 am and is filed under Uncategorized. You can follow any responses to this entry through the RSS 2.0 feed. You can leave a response, or trackback from your own site.

173 Responses to Vantastic Anniversary Gift as Legends watch on…….