Not The End of the World, But The End For Arshavin? (plus Player Ratings)

There was something poignant about the moment, mid way through the second half, when Arsène Wenger made his first two substitutions.

Gervinho and Abou Diaby were bouncing on the touchline: primed, eager and ready while the fourth official fiddled with his number board.

Three yards away from them, on the pitch, a small Russian man was standing on his own, looking downcast and waiting for the inevitable appearance of the number 23 on the official’s board.

After an evening in which pretty much everything he tried had failed, you could see that Andrei Arshavin was not just expecting to be hauled off: he WANTED to be hauled off. 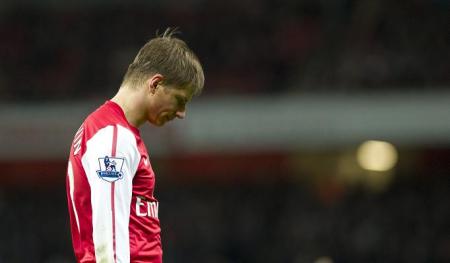 When the numbers flashed and it turned out that he was not one of the two players being substituted (Ramsey and Mertesacker ended up making way) he looked genuinely shocked. And disappointed.

It is heartbreaking to see what has happened to our pocket Russki.

Once upon a time (in an earlier life, it sometimes feels), he scored four goals against Liverpool in one of the most devastating individual attacking displays I’ve ever seen.

You could never say he was 100% consistent, but he always had the potential of doing something brilliant.

Yes, his tracking back was somewhere in the hinterland between rare and nonexistent; yes, his demeanour was often doleful; yes, his arse seemed large enough to make him as tall lying on his side as when he’s standing; but when he did fire into life he could ghost past players like they weren’t there and put his goals away with venom.

Yesterday he was a shadow of the player who terrorised Liverpool. He just looked absolutely shorn of confidence and ability. Towards the end of the game I thought he was drifting infield to hide among groups of Fulham players in order to not receive the ball.

I, for one, was left with the distinct impression that this could be the end of the Russian’s career at Arsenal. I might be wrong. I hope I’m wrong. Maybe our genius manager can get him firing again. But he seems to be in a dark place and it may well take a fresh start somewhere else to drag him out of it.

The game itself was a bit of a come-down after the high of beating Dortmund midweek and becoming the first English club to qualify for the knock-out stages of the Champions’ League.

Arsene Wenger blamed physical and mental tiredness and he had a point, but the Cottagers deserve credit too for playing a good defensive game designed to smother our movement between midfield and attack.

However, we also had a familiar dollop of bad luck: shots cleared off the line (again); gifting the opposition an own goal (again); a rival ‘keeper in inspired form (again).

Despite Fulham’s obduracy we carved them open enough times to have won the game. Twice in the first 10 minutes Arshavin was involved in penetrating attacks down our left (unfortunately that was more or less the end of any positive contribution from him).

Theo was ripping them open down the opposite flank and driving into their box at will.

But overall there was a bit of a lacklustre feel to our team performance. Both Ramsey and Arteta had industrious displays but both seemed to find that their touch was off, resulting in a lot of misplaced passes and being caught in possession.

We were also standing off the Fulham players too much and not pressing the way we had done against the Germans on Wednesday. The pressing game has been a big part of our revival this season and at times against Fulham it was notable by its absence.

By the time Fulham scored I had come to the conclusion that it was just going to be one of those days. And when we did put them ahead with a Tommy Vermaelen own goal (I would need to see it again to judge how culpable he was), I feared the loss of all three points.

As several AA commenters have already pointed out, you would have expected last season’s Arsenal to end up losing from that position. But this year’s crop has some real bottle. It was just a shame that it took us going behind to spark the team into life.

Suddenly we had a real urgency about us. Arsène’s attacking substitutions (including taking off Mertesacker and dropping Song back into CB) helped galvanise the team and we launched a series of frenetic onslaughts on the Fulham goal.

The equaliser was a fine glancing header from Vermaelen, making amends for the own goal. 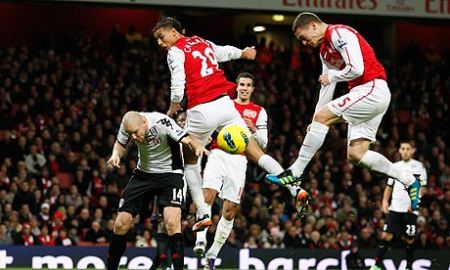 Theo and Gervinho (showing Arshavin how it should be done) continued to torment the opposition defence from their respective wings, Prince Robin twisted and turned and peppered their goal and we went close numerous times. But, with Schwarzer eking out the time like a dying man the clock eventually ran down.

Final score 1-1. No doubt some of the nay-sayers will leap on the performance and result as evidence that we have not really progressed from last season. But they would be wrong. Even when we were winning Doubles we would get the occasional draw against weaker, but resolute, opposition. It happens to everyone.

And the positives were plain: we showed character to come back from a goal down, our unbeaten run continues and we made numerous chances to score and win the game.

A minor disappointment, but project New Arsenal is still very much on track.

Szczesny: No chance for the goal and made one fantastic save from a powerful shot. His kicking was better than usual, but overall he didn’t have much to do. 7

Djourou: Came in at right back and had a super game. Made some great last-ditch tackles and nicked the ball from the opposition all game long. 8

Mertesacker: Another top performance by the Mert. I didn’t see him put a foot wrong and his reading of the game is so good that it often means he snuffs out attacks before they’re dangerous. It’s not as spectacular as the last-ditch scramble, but a lot better for my heart rate. Also came close to scoring with a good header. 7.5

Vermaelen: Powerful and dynamic as always. One point off for the og. One point added for scoring the equaliser. 7.5

Santos: His best game yet. Our new Brazilian is fast becoming a crowd favourite and yesterday he looked composed, skillful and dynamic. He drifted out of position occasionally, but usually because he was trying to push us forward. Got no help from Arshavin. 8.5 MoTM

Song: Good work screening the back four – and he was called on to clear up more than he ought to have been because of the way his MF team mates were giving away possession. Unfortunately could not tap his alter ego Songinho to inspire another goal for us. 7.5

Arteta: Did a lot of his usual good work helping to screen the defence and keeping the ball moving. His touch went off badly in the second half and, uncharacteristically, he lost the ball several times. Tired, perhaps. 6.5

Ramsey: Always driving, moving, tackling, trying to make things happen. But yesterday it just wasn’t coming off for young Aaron. Not his best game, but he never hid and never stopped trying and after years of Denilsonitis I’ll take that any day. 6.5

Walcott: Brilliant and direct in the first half and unlucky not to score or get an assist. Faded a bit in third quarter but came back strongly as we pushed for an equaliser and then a winner (that sadly never came). Surely his critics must shut up now? He is one of the best wide players in England and is demonstrating it on a weekly basis. 8

Arshavin: Nothing to add to what I said above. A bad – and sad – day for the Russian. 5

Van Persie: Exuded class all game, but for once the magic touch was off by a smidgen and he didn’t get on the score sheet. Fulham defended well, denying him space in the areas he normally likes to exploit between defence and midfield. 7.5

Subs
Gervinho: Outstanding when he came on. Was unlucky not to inspire us to victory. His brilliance made Arshavin’s performance look even worse. 8

Diaby: Nice to see him back. He showed some of what he can do (but also a little bit of his old failing of holding onto the ball for too long). 7

Chamakh: Didn’t have much chance to get in the game, but he tried. 6.5

Manager: His decision to start with Arshavin and leave the electrifying Gervinho on the bench may well have been what cost us all three points. His attacking substitutions helped make for an exciting finish, but it was still two points lost. 6

This entry was posted on Sunday, November 27th, 2011 at 10:01 am and is filed under Uncategorized. You can follow any responses to this entry through the RSS 2.0 feed. You can leave a response, or trackback from your own site.

180 Responses to Not The End of the World, But The End For Arshavin? (plus Player Ratings)