Now is the time to make Arshavin Arsenal’s Playmaker

‘We cannot allow ourselves to indulge in sadness and melancholy’ 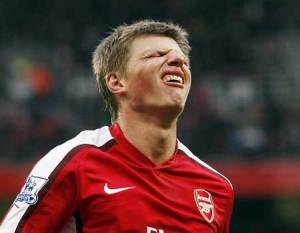 With the departure of Cesc Fabregas and the long-term injury to Jack Wilshere, Arsenal is left with a hole, in more ways than one. It is a cruel double blow to have neither of them available for this pivotal position, especially during this transitional period. Since the start of the new season, the much-changed Arsenal team has looked unfamiliar to us, as if it has lost its identity, its USP, its typical style of football, and the main reason for this is, nobody has been able to make the ‘hole position’ theirs until now. It comes as no surprise that our results in the League have also been well under-par, and now is the time to make some bold moves so we can regain momentum and confidence again, and shake-off this mantle of sadness and melancholy once and for all.

The Playmaker position, just off the striker – the Dutch call it ‘de hangende spits’ (the ‘hanging-off’ striker) was made for Dennis Bergkamp and vice versa, back in the mid-nineties. He epitomised what can be done to a team and its style of football if the right player takes up the no. 10 position. DB10 was always able to find space for himself, so the defence and midfield had an outlet, he was able to hold on the ball and allow the attacking midfielders to move forward, but he was just as capable to set up a quick attack for his fellow striker and wingers – often with an inch-perfect defence-splitting pass that would make you go weak in the knees for joy – or to take on defenders himself and score goals from just outside the penalty area, or inside the box. Dennis had it all: brilliant first touch, superb vision, a winner’s mentality, a professional through and through, and somebody who took pleasure in doing beautiful things with a ball on the pitch. It was this quest for beauty that has made him such a special player and made him immortal to us, and, in a way, he made us all feel a bit immortal along the way.

Cesc Fabregas was a different ‘no. 10’ for us: more of an attacking midfielder than a striker, with a great ability to pass the ball within tight spaces and to boss the midfield area. However, what he had in common with Dennis was the ability to pick a defence splitting pass and to create something out of nothing, for which he also had the vision and touch. He was another great Arsenal player although not in the same category as Dennis, but then who is, or will ever be?

Jack Wilshere is a very promising player for both Arsenal and England. For me, he is our future ‘nr. 10’ as he is similar to Cesc in many ways, with great vision and a superb passer of the ball, very good in tight spaces and with a phenomenal fighting spirit and stamina. He came off age last year during our game against Barcelona, and to do so at such a young age is truly astounding. We are unbelievably lucky to have him, and I am sure he will be another Arsenal great. The only thing missing until now is Jack’s goal scoring ability/record, and until this improves he can compensate it with his vision and passing ability, which should lead to setting up many successful attacks and assists.

So, who is going to fill this position for us until Jack returns?

The candidates are: Aaron Ramsey, Thomas Rosicky, Mikel Arteta, Yossi Benayoun, Robin van Persie and Andrey Arshavin. I cannot see Arsenal change the system to 4-4-2 in the near future, so I am going to base my views on the current 4-2-3-1 system. In the ‘2’, Alex Song is our ‘pure’ DM and there is back-up for him from Emmanuel Frimpong and Francis Coquelin. For me the best partner to Song in the ‘2’ is a typical box-to-box midfielder and either Aaron Ramsey or Mikel Arteta should play in that position. The DM’s partner should be an all-round midfielder who can defend, and go forward, create chances for others and score goals himself. Both Arteta and Ramsey can offer this, and we are lucky to have two such good players to cover this position.

But who should play in the hole: who should be our Playmaker? Ideally, a player for this position should have vision, hold on to the ball really well, a great passer of the ball and ability to score goals with an average of 0.25 goals or higher, per game.

For me, for now, it is neither Ramsey, nor Arteta. For different reasons, I find it too early for them to be given this vital role in the team. I am not convinced that both of them have the vision that is required for this key position and with PL goal-scoring records of 0.16 goals per game (Arteta) and 0.12 (Ramsey), I do not feel they are prolific enough either. However, it is early days and both could claim this position over time.

Rosicky has the vision and the passing ability, but lacks the stamina and consistency to really claim this role. When TR played in this role this season, he gave Arsenal its identity back, but he cannot do this twice a week for us and his goal scoring record is not great either with only 0.13 goals per game. For me, Rosicky should be the second choice for the Playmaker role, and he is a good squad player for Arsenal to have (just think back to his second half performance against Udinese in Italy).

Yossi Benayoun could be a possibility, but as he is on loan at Arsenal I don’t think we should give this position to him on a regular basis. His goal scoring record is the same as Arteta’s (0.16 goals per game), so not bad but also not brilliant. I would like to see more of Yossi in an Arsenal shirt so I can make a proper assessment of his abilities.

This leaves me with two remaining possibilities: Robin van Persie or Andrey Arshavin. Both are options I would like us to try out, just to see whether it works. As a captain, RvP is isolated as our lone striker. If he were to play in the ‘hole position’ with either Chamakh, Park, or even Gervinho or Walcott, in front of him, he could be both a better leader of the team and improve our attacking options. He would not be a typical Playmaker, but fill in the role similar to the way Rooney does at MU. If we were to opt for a 4-4-2 formation, as many of us would prefer, this would work very well.  It would mean a strong decrease in focussing on our passing game and continuous emphasis on breaking quickly – a bit like the Arsenal of the early parts of the last decade. We have the wing-players for it now with Walcott, Gervinho, Ryo and Ox, and with Chamakh and Park we have the typical strikers to make this system work for us. We could add to this strike-force at the next TW and all could be rosy again. 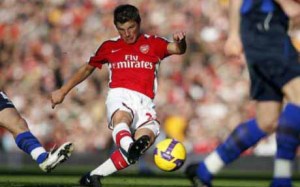 However, as I said earlier, I don’t believe we will adopt a 4-4-2 system in the near future. In the current 4-2-3-1 system, we need a playmaker in the middle of the ‘3’. As we are not talking about a classical playmaker – as in a 4-4-2 formation in which the player next to the DM would be: a role that would fit both Arteta and Ramsey a lot better in my opinion – we need somebody in this role who can hold on to the ball in tight spaces, pass it with ease, find gaps in defences easily, makes good attacking decisions in a flash, and can score goals from just outside the box as well as inside the box.

For me, this player is Andrey Arshavin. Please don’t get me wrong in thinking I am a huge fan of Arshavin: he is not consistent enough, and does not work as hard as is required, but then – as we all know – he is not playing in his best position either. Arshavin has a PL goal scoring record of 0.27 goals per game, which is the same as DB10 had for us. He is great passer of the ball and can split open defences easily. He holds on the ball reasonably well, although this is not one of his strong points. He can score from just outside the box, and I have no doubt he would link up well with RvP.

It is only a matter of time until Arshavin leaves Arsenal, but I think he deserves to be given the ‘hanging-off’’ striker position, just this once: at least until Christmas this year. He is our best option there and it would be cruel not to give him a last opportunity to show us all how really good he is. Why Arsene Wenger has not done this until now is a mystery to me, but hopefully the current lack of alternatives might change his mind.

This entry was posted on Thursday, October 13th, 2011 at 9:32 am and is filed under Uncategorized. You can follow any responses to this entry through the RSS 2.0 feed. You can leave a response, or trackback from your own site.