Due to a recent spell of bad results in the Premier League and the relentless complaining of our fans, we are now looking for a new Manager.

During the reign of Arsène Wenger, Arsenal won three League Championships, Four FA Cups, achieved the cult-status of the Invincibles for a 49-games spell of not getting beat, reached the CL final, played in the CL for 14 consecutive seasons, played a brand of football envied all over the world, and moved successfully to a brand new stadium, whilst keeping the club in a healthy financial position.

Arsenal have just sold their best player, captain and playmaker Cesc Fabregas, and shipped out another 9 players, but we also bought 11 players during the Transfer Window. The new squad is full of youthful talent, experienced players, with a number of national captains, and a top quality spine to the team.

However recent results have been disappointing and we feel our incumbent manager has been far too slow with the integration of the new players – after all he had 21 days since the last day of the TW (including an international break). Arsenal football club had to endure two woeful away games against Manchester United and Blackburn Rovers in the new season, and we have come to the conclusion that the most successful manager in our history is no longer capable of bringing our beloved Arsenal the successes that it is simply entitled to.

We are now looking for a manager who does not complain when his best players are sold, is able to integrate 11 new players into the team in just a few days time, and can bring us instant success (minimum requirement of PL or CL title this season). 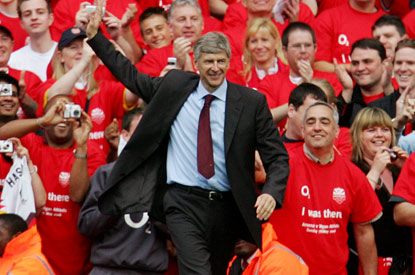 HAVE YOU GOT WHAT IT TAKES TO REPLACE ARSENE WENGER, AND MAKE US WIN THE PL AND/OR CL THIS YEAR AND NEXT YEAR AND EVERY YEAR AFTER THAT?

Successful Applicants should be able to demonstrate:

If you believe, you have what it takes to be successful in this role then please get in touch with the major shareholder Stan Kroenke, by emailing him at: silentstanny@arsenalfornow.com

If this position is not for you, but you know of somebody who has got what it takes, please let us know the name of him/her and their contact details, including a summary of why you believe they would be excellent candidates.

This entry was posted on Tuesday, September 27th, 2011 at 9:38 am and is filed under Uncategorized. You can follow any responses to this entry through the RSS 2.0 feed. You can leave a response, or trackback from your own site.

242 Responses to Job Advertisement – Arsenal Football Club are looking for a new: MANAGER