After a fine win and an excellent performance on Saturday you would have to be of a churlish disposition to find any negatives.

So here I am, Churl-in-chief, primed and ready for a bit of top churling.

It amounts to this: I have one complaint about our lads.

It’s not the wayward finishing (although if some of our forwards were tasked with clubbing baby seals, my money would be on the cuddly little blubber-buckets to emerge injury-free).

Nor is it the tendency to always look like we might give the opposition a chance to get back in the game no matter how much we’re battering them. 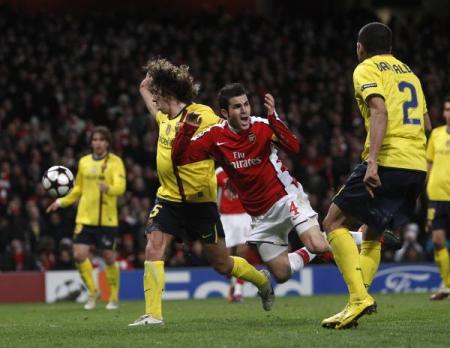 No, my beef is with our players’ behaviour when they foul and are fouled.

We’re all familiar with the moronic baying of ‘same old Arsenal, always cheating’ whenever one of our team goes down under an attempted leg-breaker or, conversely, whenever an opponent is left on the floor after an Arsenal tackle.

Make no mistake, the label has stuck.

From the Mensa-dodging nouveaux-riches of West London to the barcoded disappointment-junkies of the far North East; from the Unconvincibles of Old Toilet to the Inconsequentials of N17 there is a veritable chavscape of received opinion that Arsenal players really do cheat.

But it’s clear from recent games that the problem with our team is that THEY DO NOT CHEAT ENOUGH.

That is the great irony: the team reviled the length and breadth of the land as cheats is actually more honest than just about any of its opponents,

There was a classic example in the Wolves game. The Mighty Zubar (I’m sure he used to be a character in Dan Dare when I was a kid) executed a studs-up challenge into Robin van Persie’s knee. I happen to think it wasn’t particularly malicious but was, rather, a cack-handed attempt to get the ball. However, it was rash and dangerous and certainly deserving of a yellow.

On impact, Robin was spun in the air and crumpled to the ground. And here’s where Zubar was clever. Knowing that he had just made a cert yellow card tackle (and possibly even a red card one) he crumpled to the ground too, mysteriously clutching his shoulder. It was enough to confuse the referee, Chris Foy, who did not penalise Zubar.

We saw the same thing the week before at Newcastle. Joey Barton, one of the modern game’s most noted thugs, turned out to have a brilliant line in rolling around on the floor whenever he went in for tackle with one of our players. From macho man to milkshake man in a heartbeat.

In that game the truly awful Phil Dowd bought it every time. Probably the worst example was the free kick given against Rosicky that led (indirectly) to Newcastle’s fourth goal. He and Barton jumped together half-heartedly, neither really touching the other. Rosicky stayed on his feet but Barton went to ground. Cue the man from Dowd Cuckoo Land: free kick, goal, two points lost.

Similar examples were littered throughout that entire game, particularly in the second half.

And during Saturday’s Wolves game there were several occasions where we were penalised for fairly winning tackles, just because the opponent went to ground and feigned injury.

Foy’s criterion for giving a free kick seemed to be no more sophisticated than “he fell over, must have been a foul.”

At the same time there were other moments where our players took whacks to the head or boots to the calf but did not collapse in agony. Our lot seldom do that – if anything they simply tend to stay on their feet and look a bit affronted.

Many people observed that against Newcastle, if Diaby had rolled around in agony after the Barton challenge he would probably have got the little toe-rag a yellow. But Abou didn’t do that because, although he knew the tackle had been a potential leg breaker, he wasn’t actually that badly hurt. He was too honest to pretend he was in severe pain. Instead he got up, tickled Barton’s neck and the rest is history.

Earlier in the same game, Arshavin also hopped straight up after another appalling Barton challenge from behind. (Mind you, Arshavin never shows he’s hurt: that tiny frame carries all the suffering of Mother Russia in its soul, so the odd smack in the mouth or boot up the arse is neither here nor there).

On one level I applaud our players for their honesty. One demented Ivorian aside, I can’t think of any Arsenal player who regularly feigns injury, whereas our opponents are doing it in every game and are winning free kicks for it, as well as getting our players carded.

Maybe it’s time we dished out a bit of their own medicine to them. I don’t mean we should pretend to be fouled when there’s been no contact, but when there is a bad challenge we should stay down and make it clear to the ref that it was dangerous. It won’t always work (Robin was clearly hurt by Zubar but Foy missed it) but if it works half the time that’s more free kicks for us and fewer for whomever we’re playing.

And when our players mistime their challenges and catch the opponent instead, let’s take a leaf out of Zubar’s book and go down as well.

The sad truth is that, with the standard of officiating in the EPL today, playing fair just gets you shafted.

Now let’s go and win the League (and if, to do so, we have to sometimes be less than angels, that’s OK with me).

Be a Gooner, Be a Giver

One of our young gooners has signed up to do the Fun Run for Arsenal’s chosen charity Centrepoint and it would be fantastic if any of you felt you wanted to support her and the charity by donating on her giving page.

The Fun Run will take place at the Emirates stadium on the 19th March 2011. Centrepoint do such good work for homeless young people in London and Arsenal are hoping to raise £500,000 this season to help fund the refurbishment of a facility in Soho.

This entry was posted on Monday, February 14th, 2011 at 9:31 am and is filed under Uncategorized. You can follow any responses to this entry through the RSS 2.0 feed. You can leave a response, or trackback from your own site.