Patrick Barclay, Hugh McIlvanney and Brian Glanville are all journalists getting on in years and yet, along with a couple of younger ones in the forthright Martin Samuel and the superb Michael Atherton, are probably the stand out sports writers of their generation.

The clue perhaps is that all these guys are  sports writers and not sport reporters; their language skills are as great as the sporting prowess of the people they write about and they cover many sports including football. Is it an accident that all these guys write mainly for the Broadsheets, although some do contribute a column for the Tabloids as well? Which brings me to my main question.

Why is football reporting in the tabloids, especially the red tops, so bad? Sensationalism rules. The headline, it would seem, is far more important than the quality or factual accuracy of the resultant article.

How often do you watch a match, either live or on TV, only to read next morning an article that suggests that either you are a complete idiot or watched a different game? I am not just talking about the Arsenal and the coverage we get, but football in general seems to me ill-served by second rate scribes presumably forced to pander to the needs of editors and headline writers in order to maintain a lifestyle. 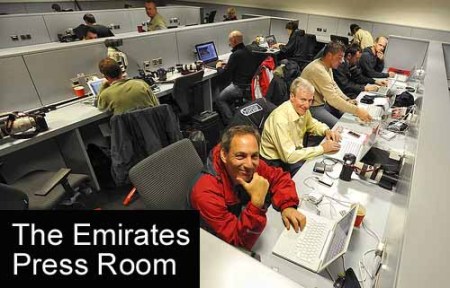 The same cannot be said of cricket, which has many fine wordsmiths and has spawned a vast number of books fit to grace the shelves on any sports lover’s library.

The reason for today’s rant: I  have been re-reading the Christmas Eve article in the Times by Michael Atherton that covers cricket, golf and a fine tribute to Ian Holloway and his Blackpool team all entwined in a discussion on coaches and coaching. If you can get to read it, do so; you will not be disappointed.

What a tragedy then that the wider football press struggles to produce such excellent contributions more regularly across the board,  rather than the pathetic gossip, innuendo and nonsensical hype that some papers seem duty bound to supply. But then I suppose, if  the editorial staff  can consider the goings-on in Big Brother worthy of  their front page lead even in these troubled times, we shouldn’t be surprised that such editorial crassness is carried  through to the back page.

Given that the transfer window has now opened, I wonder how many players AW and his counterparts across the premier league will  supposedly be  buying and selling over the next month, according to these well informed  reporters and their sources.

It makes one wonder, how long  until the  confrontational nonsense that epitomises boxing and wrestling’s pathetic coverage, is adopted  by the football media in order to justify still more outrageous  headlines?

This entry was posted on Tuesday, January 4th, 2011 at 9:42 am and is filed under Uncategorized. You can follow any responses to this entry through the RSS 2.0 feed. You can leave a response, or trackback from your own site.

118 Responses to Football Journalism – what the papers don’t say