Last year he was well on the way to becoming the Premier League’s best defensive midfielder. After some false starts he seemed finally to have perfected his game: pick up the ball from the centre backs; move it on quickly to the more progressive-minded midfielders; always be available to receive and pass when we need to keep the ball; break up the opposition’s attacks when we lose it. For a period last year he was doing that job brilliantly. 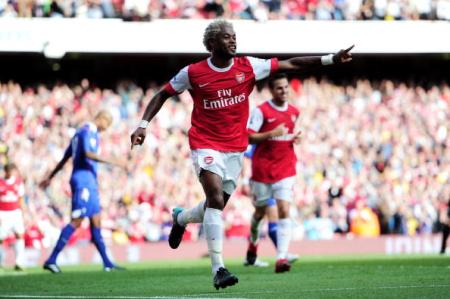 I lost count of the amount of times he was our most advanced attacking player on Tuesday night. And when he wasn’t furthest forward he was bursting into the opposition penalty area time and again to break up our best attacking moves.

It was as if his head was possessed by the ghost of Thierry Henry, his feet by the spirit of Willie Young. Perhaps the soul takeover happened at the same time he got his Norman Beaton haircut.

Imagine if Andrei Arshavin started a game in the left forward position, but spent most of the 90 minutes covering right back. That’s the equivalent of what Song was doing.

The question is why?

It can’t really have been down to sheer stupidity, because it’s a pattern we have seen in the last few games. If Arsene Wenger and Pat Rice disapproved they would surely have given him a good slap round the back of the Colney bike sheds by now.

Instead his forward movement was so pronounced in this game that he must have been instructed to play this way, which is really worrying. When you finally get a player to fulfil perfectly the role for which his footballing gifts suit him, why would you switch him out to do something he’s less skilled at?

Don’t get me wrong. I think Song is a great player. But he’s a great defensive midfielder, not a great attacking midfielder. He does not have the touch, control or eye for a quick killer pass that is essential for the position he was playing in on Tuesday night. That’s a job best done by the likes of Fabregas, Nasri, Arshavin, Rosicky and Wilshere. Yet I would bet that on average across the game he was more advanced than either Wilshere or Rosicky. Hell, there were even times when Chamakh had dropped deep to pick up the ball and Song was our centre forward.

I know Denilson was playing a holding position which theoretically gave Song the freedom to roam, but if that’s the case there’s no need for Song at all – let’s have a more skilful midfielder in there instead. Against Belgrade Song was generally the reason our attacking moves broke down. His misplaced passes around the edge of the Belgrade box became too many to count and when he got inside the box his less-than-refined close control did the same.

He still managed to carry out his midfield defensive duties to some degree and I’m not going to criticise him for leaving holes because, on the night, Belgrade were offering very little in attack.

I’m more concerned with his cack-handed contribution to our attacking moves. We have the best attacking midfield options of any team in the Premiership – and Song is not one of them.

Come on Arsene, you must know the saying about square pegs and round holes. If you had a bottle of premier cru claret you wouldn’t put it in the fridge (unlike Owen Coyle http://www.dailymail.co.uk/sport/article-1315023/Des-Kelly-Arsene-Wenger-needs-cup–glass-wine.html). So don’t put your best defensive holding player in the position that belongs to an attacking midfielder.

This entry was posted on Thursday, September 30th, 2010 at 9:18 am and is filed under Uncategorized. You can follow any responses to this entry through the RSS 2.0 feed. You can leave a response, or trackback from your own site.

83 Responses to Song’s Position In Question – written by RockyLives