Partizan. Fabianski to have a quiet but impressive game – written by BigRaddy

I have to be honest and say that prior to my research I knew little of Partizan Belgrade, not even knowing which country they represent (my geography tuition ending prior to the destruction of Yugoslavia). I read that they are top of their League and have won the Serbian League and Cup double for the past 2 years.

Their ground holds 32,000 fans who appear to have considerable influence over the club; a few years ago the fans were unhappy with their trainer and refused to attend home games until he resigned, which he duly did. This requires a level of organisation that we Gooners can only contemplate  – perhaps there is a way to persuade the club to buy a new GK ! 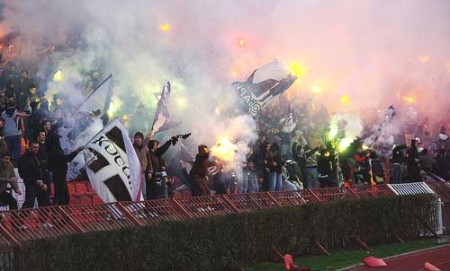 They lost their opener 1-0 away to Shaktar and showed themselves to be a decent team. Their star player is the inevitable Brazilian, a striker named Cleo who has scored 14 goals in 15 European games.

But this game is about how Arsenal bounce back from the weekend, it is a test of character in what is a difficult week. Poor Fabianski will be under enormous pressure knowing that millions of viewers will be awaiting his first error; should he fail tonight the repercussions will surely end his Arsenal career and many would give away 2 points to see him do just that, an appalling desire from so called “fans”.  I would like Fabianski to have a very quiet evening but make two wonder saves, thereby giving him the confidence to play well at Stamford Bridge. A clean sheet would be great.

As usual I have no idea of the team but I would play these chaps: 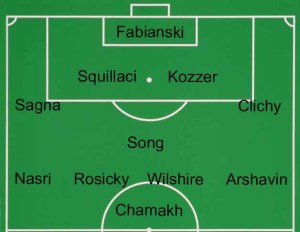 The entire defence had a terrible game at the weekend, Almunia took the brunt of the blame but they were very poor as a unit. Tonight can only be better. Partizan play a packed midfield with a lone striker, a formation which tends to blanket our passing game, patience will be an issue. We need to be mindful of the ball over the top, particularly as our defenders normally play high up the pitch. I hope we attack from the off and quickly build a platform to win the points, if we score first we will go on to win, but with confidence having been shaken, an early Partizan goal could be ruinous.

Founded in the 6th Century BC, Belgrade is the 4th largest city in S.E.Europe with a population of 1.6m. It has one of the biggest rivalries in World football between Partizan and Red Star. Serbs are very good at tennis having reached the final of the Davis Cup.

This entry was posted on Tuesday, September 28th, 2010 at 9:14 am and is filed under Uncategorized. You can follow any responses to this entry through the RSS 2.0 feed. You can leave a response, or trackback from your own site.

135 Responses to Partizan. Fabianski to have a quiet but impressive game – written by BigRaddy