Into the House of Darkness – WHL – written by BigRaddy

Let us start here. There is light and there is darkness, there is good and there is evil, there is N5 and then there is N17. N5 is blessed with parks, glorious architecture, fine restaurants, great bars and the finest football stadium in Britain; whereas N17 is a total toilet, the parks littered with dogshit,  litter and hoodlums, the architecture can only be described as urban wasteland, the restaurants vary from appalling to mediocre, the bars imbue such depression that suicide is an attractive alternative, and the football ground (it cannot be called a stadium) is a complete joke.

If you win the Lottery you may well choose to live in Highbury, if you have descended into a life of crack and crime, you probably live in Tottenham.

(N:B: The above is written in jest, but there is a little truth in there…..)

And the football teams reflect their surroundings. Arsenal have an urbane, intelligent manager, Spurs a semi-literate “wheeler-dealer” (Sky tm), Arsenal have a team who play with brio and flair, Spurs have Huddlestone and Crouch, Arsenal have a warehouse full of silverware, Spurs won the league in Black and White.

And so we come to the Carling Cup. When we drew the mugs from N17, I despaired because the Carling Cup is a meaningless trophy for us but any game against the forces of evil is big, and the potential of losing to them hurts, plus we know how Mr Wenger views the CC with his attitude towards playing only the youth and fringe players. The last time we played in the CC at the Lane, we left humiliated (though the 5-1 scoreline hardly reflected the game).

However this time could be different because somehow Spurs have found their way to the top table and have to prioritise just as we do. In other words we will find out by Harry’s team selection whether Spurs really are a Top 4 side or just pretenders who know they will get bounced out of the CL and finish outside the Top 4. Will Redknapp play any of his first team with West Ham away and Twente at home inside a week?

If not we could be in for a treat because we have such strength in our reserve and youth teams. Unfortunately the injuries to so many of our first team precludes AW from playing some of the second string (JW, Vela Kos/Squil,Denilson, Ramsey etc), but we are sure to see Gibbs and Djourou. Perhaps an outing for JET who is set to cause havoc.

The Young Men in the White Hats…… 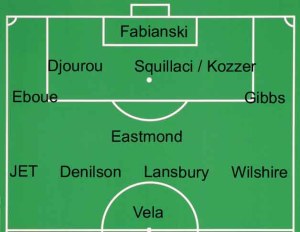 My team is made up from a process of elimination, with the plethora of injuries in the forward positions we will have to pack the midfield, plus many of our best youngsters are out on loan.

To me the games rests upon the team Harry plays, has he the courage to play a reserve team in front of an expectant full house at WHL? He knows that the record breaking win (as in they broke our undefeated record) set Tottenham up for their late run to the CL, and also how important a win is to his knuckle dragging acolytes –  Harry is nothing if not pragmatic. I expect Spurs will line up with some big players, Keane, Jenas, Palacios, Hudson, Krankjar, Dos Santos, Corluka and who knows maybe our mates David Bentley and William Gallas – all Full Internationals. They will not want to be beaten by kids

The final word must go to Bobby Smith who died on Saturday. I was raised in a Tottenham loving home, my father was Spurs and took me many times to WHL to watch the Double team of 60/61. In a side of hugely divergent talent from the silky skills of Blanchflower to the destructive aggression of Mackay one man stood out for me, his name was Bobby Smith. A proper centre forward , hard as nails, great in the air, a tremendous shot and no mean skill on the ground, a natural goalscorer.  Bobby Smith was my first hero , at this very moment I expect he will be scoring hatricks  on the Elysian Fields. Gone but not forgotten.

Can we win? Of course. Will we win? Unlikely

This entry was posted on Tuesday, September 21st, 2010 at 9:33 am and is filed under Uncategorized. You can follow any responses to this entry through the RSS 2.0 feed. You can leave a response, or trackback from your own site.