It is not teams but squads that win the EPL or the CL. If the CL final was tomorrow and everyone was fit and available, what team should we pick based on what we know about the players at this stage?  For the first time in several seasons, we have well balanced squad comprising a solid defence, an embarrassment of riches in midfield and a true cutting edge up front, so competition for places will be hard fought.

Players will develop through the season. Some will come into contention and others will be surpassed. For the sake of the argument, let’s assume the impossible – that we have no injuries. 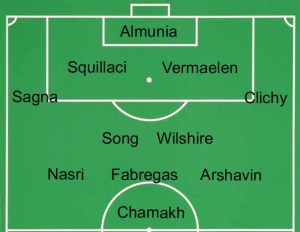 There are some players who we know would be in the starting line-up if available – but not as many as you might think. This is purely my opinion and I expect many to disagree, but at this stage of the season, for me, there would only be 5 guaranteed starters – Vermaelen, Sagna, Song, Cesc and Chamakh.

4:5:1 is here to stay – but more in the form of a 4:2:3:1 or a 4:1:4:1 depending on the opposition. The midfield 5 continually interchange and cover for one another according to the pattern of play. All of our midfielders like to go forward and look to score goals and that is a great thing, but when we are under pressure, they need to be disciplined and defend as a unit. We are often criticised for being too narrow in our play and there is some truth to this. The width will have to be provided by the full backs overlapping as Nasri and AA will always look to cut in towards goal.

Almunia is on a mission to prove his many critics (myself included) wrong. He hasn’t been subjected to huge pressure yet, but you’d have to say he is the safest choice for keeper based on his performances so far and long may it continue.

Vermaelen is a gimme. He has been outstanding and would make any team in the world. At the moment it’s hard to choose between Koscielny and Squillaci for the right sided centre back. Kozzer has been extremely impressive in the way he has adapted so quickly to the team and English football albeit with the occasional lapse of concentration that could cost a goal. Squillaci has shown us what experience brings. He is strong, solid, and aggressive. He keeps it simple and reads the game very well. I thought he was better than Koscielny against Braga and didn’t get beaten for pace. At the moment I would just plump for Squillaci for a big game, but if Kozzer continues to grow in the side he may well become favourite by May.

We are lucky as we have 2 excellent players vying for both left back and right back. Sagna is having his best start to a season since he joined and has to get the nod over Eboue. Clichy’s experience and attacking ability will keep him as favourite for left back unless the mistakes and over-elaboration when defending creep back into his play, in which case, Gibbs is a more than adequate replacement.

The midfield and attack:

Our midfield is so fluid in its movement and interaction that it is almost pointless to talk about position on the pitch; but here goes. Song has to be considered as one of the deep lying midfielders although he played very effectively in advance of Cesc in the second half against Bolton. So would we play another defensive midfielder? The candidates are Wilshire, Rosicky, Ramsey and Denilson and Diaby. Wilshire has played this role in the last couple of games. He is tough in the tackle although sometimes a bit too reckless. He is scarcely able to last the full 90 minutes at the pace Arsenal play so we must be careful not to heap too much pressure on him. That said, Cesc was good enough at his age, if he continues the form he has shown so far, he’d get my vote for the position – controversial I know, especially when you look at the quality of the other players available.

So who will play either side of Cesc? On Tuesday we saw Nasri on the right (but actually he played right across the pitch) and Arshavin on the left and those are the two I would currently pick. Arshavin can be brilliant one minute and frustrating the next, but he has a rare ability and is a big game player.

Chamakh is my choice to lead the attack since he has all the attributes necessary – he’s strong, a handfull for defenders, he wins headers, he can hold the ball up, his close control is excellent and he brings his team-mates into play.

Most likely to come on as a sub:

Depending on the course of the game, RvP and Theo  if we are looking for a goal, Eboue and Diaby if we need to consolidate a lead.

Not even on the bench:

No RvP in the starting line-up? It seems madness that a player rated by many as the second best in the squad would not make the starting eleven. He is a brilliant player, but do his particular skills compliment those around him? I don’t think he is as good a target man as Chamakh or a better dribbler in tight situations than either Nasri or AA, so reluctantly RvP sits on my bench – but what a sub!

This entry was posted on Friday, September 17th, 2010 at 9:08 am and is filed under Uncategorized. You can follow any responses to this entry through the RSS 2.0 feed. You can leave a response, or trackback from your own site.