Thunderbirds Are Go – written by London

If ever there was a game that went to Wenger’s original plan it was surely today with Arsenal beating Bolton by what ended up being a comfortable three goal margin. In an interview just before the game in which Wenger announced the team he was asked if he had made his selection with one eye on the midweek game against Braga to which he was able to honestly answer, no, but had he been asked whether he had made it with both eyes on it he may well have had to fess up and say yes. There is no doubt that the three points were important to him but it was very clear that he never put a single drop more fuel in the tank than was necessary to achieve that goal.

Clichy, Sagna, Nasri and I suspect Vermaelen were all rested; Diaby’s injury might be the only spanner in today’s fine works but with a bit of luck they should all be fighting fit and raring to go on Wednesday. The resting of some gave rise to opportunities for others: Squillaci, Gibbs and Denilson made their starting debuts for the season, all nicely warmed up and ready should they be called upon in the week, this might seem as though I am putting a bit more emphasis than is necessary on the Champions League game but if you saw Braga destroy Seville you will understand why.

Walcott was sorely missed: sublime passes from Rosicky and Fàbregas split Bolton apart, putting Arshavin through one on one with the goal keeper no less than three times; he missed on every occasion, making it difficult not to imagine that Walcott’s pace would have given him just that extra bit of time to compose himself and slot all three home; nevertheless, Arshavin had a very good game, he looked as though he cared and fought as hard as any other Arsenal player out there.

With the Russian squandering his opportunities someone was going to have to score and it seemed as though Koscielny picked the lucky straw; Wilshere sent in a cross to the far post for the on rushing Fàbregas who should have smashed it home but sent it across the box, bouncing of two players before Koscielny swept it home from a foot out to notch up his first goal. If it was a night game we wouldn’t have needed flood lights as his smile would have lit up the ground more than enough. Well done that man.

The goal was the breakthrough that most assumed, once achieved, would put the game in the bag, as other goals would surely follow. We certainly applied the pressure in an attempt to turn this assumption into a reality but as happens so often with Arsenal the maxim of why do it the hard way when you can do it the easy way gets turned on its head.

Bolton sent in a high ball that wasn’t going anywhere when Koscielny, rather than head it clear, sent it across the box to be picked up by a Bolton player who sent it back to the far post which was headed in for Bolton’s equalizer. This is two school boy errors in two games both resulting in equalizers it’s lucky he had scored or his honey moon period might have been over quicker than he was expecting.

The comparison between our two new centre backs became clear, while I think that Koscielny will be at Arsenal for years and grow into a very solid defender it is Squillaci’s experience that is needed right now and because of that he would be my choice to partner Vermaelen in the week.

The break came and went and Arsenal took to the field a good 5 minutes before Bolton which was the first sign of the urgency that Wenger had obviously tried to install in them at half time: it worked. Arsenal upped the tempo and Owen Coyle’s New Bolton, the one with the delusion of playing expansive football, was getting carved apart by the sublime interplay of Arsenal’s midfield. Unsurprisingly, Bolton reverted to type: when push comes to shove they are no more than Fat Sam’s thugs dressed in Coyle’s sheep clothing. (It almost works)

Koscielny was purposely shoulder charged by Davis in such a way that could have caused a serious injury; Davis is a dirty piece of work if ever there was one. Still, Koscielny recovered and carried on hopefully in the knowledge that he is unlikely to face anyone quite as despicable in the near future, well, not until Joey Barton arrives in town at least.

There are certain points in a game where it isn’t clear what Chamakh is supposed to be doing and just when you are getting a bit concerned up he pops to head home the all important second goal making you wonder why you were ever concerned in the first place. A beautiful piece of interplay between Arshavin and Fàbregas who sent the cross over for everyone’s favourite Moroccan to score his second goal of the season. 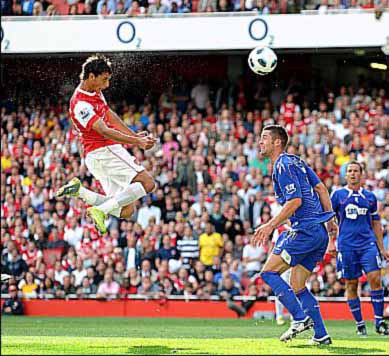 Shortly after, Cahill was sent off for hauling down Chamakh, it was only a yellow card offence but hey ho who am I to complain, that said, it did highlight what a dreadful referee we had on the day – where do they find them?

Bolton, down to ten men and a goal behind, tried to make a fist of it but with the collective skill-set that Arsenal’s mid-field possess it was only a question of time before the third came along and indeed it did and from a very unlikely source as well: Song, brimming with confidence, burst into the area and chipped the keeper from what seemed an impossible angle, this third goal killed of any remaining hope Bolton may have harboured, it was time to sit back and enjoy.

Showboating was now the order of the day and Arsène sent on Vela who, after what seemed like a fifty passing move, slotted home sublimely to finish off what was, all in all, a very good day at the office. If we beat Braga I think we can safely say our season is really up and running.

Almunia: clumsy, sloppy and some really good saves, it was the usual Big Al jamboree bag: the good the bad and the ugly. 6

Eboue: this didn’t really work with Rosicky I am not sure why, usually you can’t stop him bombing forward but he was quiet, still what he did he did well. 6

Squillaci: so far so good, his experience showed and was very welcome; it is going to be very interesting who Wenger picks to partner Vermaelen in the week. 7

Koscielny: getting better every game, the goal will help, had a particularly good second half but he has got to cut out the school boy errors. 6.5

Gibbs: ok lets get this clear, Gibbs is a good left wing back but he is not as good as Clichy yet. In truth he didn’t have that much to do but it is hard to shine on the left when the Arshavin show is in full swing in front of you. 7

Fàbregas: I am convinced it says in his contract that “if he can breathe he plays” this is how we have kept him for so long: our Captain does not do sitting on benches, the best player we have by some distance, I can’t speak highly enough of him. 8.5

Song: fit and hungry, lean and mean, the Cameroonian mid-field machiiiine had fun today, bolstering the defence in the first half before moving up to play in the attack…..what? Yep, that’s what it looked like. 8

Wilshere: getting better every game, not quite there yet but it won’t be long.7

Rosicky: it’s easy to forget that names like Little Mozart are not dolled out quite as easy as people might think in the football world, today he lived up to this name. 7.5

Chamakh: like all attackers they play better after they have scored, with confidence oozing he showed us all what a great addition he is to the squad. 7.5

Arshavin: worked much harder than usual or certainly gave the appearance of caring more, this might be because he felt a bit embarrassed at missing the one on one he had with the keeper after five minutes. 7.5

This entry was posted on Sunday, September 12th, 2010 at 8:33 am and is filed under Uncategorized. You can follow any responses to this entry through the RSS 2.0 feed. You can leave a response, or trackback from your own site.

46 Responses to Thunderbirds Are Go – written by London