It seems an age since we thrashed Fulham on a bright sunny day at the Emirates. The first home game of the season always creates a frisson of emotions; the excitement of the resumption of  pre-match customs. The meeting with your football mates (those people with whom one has shared so many highs and lows and yet have little to do with our non-Arsenal lives). The road beer as you leave the pub full of positivity and bonhomie for the stroll to the ground. The mounting excitement as one walks the familiar streets of Islington taking the lucky route to the Emirates. The first sight of the season of the magnificent  and ever impressive stadium. Not the homely , welcoming  and stately sight of Highbury nestling on the side of the hill, but the Emirates, a reflection of the new stature of our club – stand-offish, modern, imposing powerful, and above all else Big.

Through the turnstiles and into the ground climbing those dull concrete stairs to the concourse. Another beer and then up the steps for the season’s first view of the pitch. The imagination soars. For me, this is the finest view in the whole world – you can keep the Taj Mahal, the Grand Canyon, The Barrier Reef – the view from the terrace entrance is imbued with such emotion and awe that nothing can beat it.

On to today’s game. It feels like Same Same but Different. Same injury problems, same transfer frustrations, same criticism of GK’s and defence, but some different personnel. Chamakh’ s first game will I am sure bring him a goal and the start of a fruitfull career at THOF. He looks an excellent signing. The same can  be said for Koscielny who sadly (thanks to an awful refereeing decision) is unavailable today. 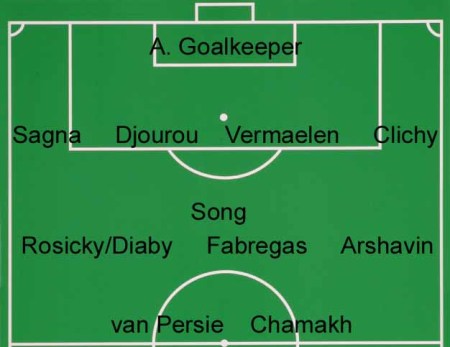 Doubts surround the fitness of Djourou, Song, Diaby, Arshavin and Cesc, so my prediction is almost certainly wrong!

Blackpool arrive having had an astonishing win at Wigan – perhaps one of the most surprising first day results in many years. Without exception, all the pundits have predicted relegation and an embarrassing campaign for the Tangerines. Having excelled themselves in the run to the play-off’s and then excited us with their attacking, adventurous style, they are surely doomed when playing PL opposition, but last week’s result may be an indicator of an unexpected resolve. Today will be a big test for them.

According to some sources Blackpool is so named because a drainage ditch emptied from a peat bog into the sea creating a black pool of effluent (really!!) at this point on the Lancashire coast (coincidentaly Dublin is Irish for black pool).

Chris Lowe (Pet Shop Boys) hails from Blackpool (as do Jethro Tull, one of the finest bands of all time), and as everyone knows Chris is a season ticket holder at The Arsenal and a proper Gooner – well played that man.

A convincing win today and a chance for the strikers to fill their boots!

This entry was posted on Saturday, August 21st, 2010 at 9:47 am and is filed under Uncategorized. You can follow any responses to this entry through the RSS 2.0 feed. You can leave a response, or trackback from your own site.