The Exit Looms …. But For Who?

When discussing buying players recently, I’ve found myself repeating the phrase ‘cautiously dipping our toes back into the transfer market’.

I know we’ve been buying players selectively over the last couple of years, but I do believe that the pattern of one decent signing over the summer will become 2,3 or even 4 as long as our profits remain healthy and the squad needs reinforcing.

In a perfect world, we’d have a gifted and balanced squad, none of whom want to leave, fed by a constant influx of talent from our youth system, but Carlsberg don’t do football management. I don’t expect us to buy any ‘finished article’ £25m+ superstars, but continue with what we do best and that is to identify players who are not on the radar of the big clubs but are ‘Wenger gems’ in the making. I expect Koscielny to be just such an acquisition.

This brings me to the main point of the post. In the future, if we are going to bring in 2 or 3 players, we will also be letting 2 or 3 players go. Competition for places in the side should be fierce and hopefully this will increase desire, ambition and work rate in the squad. I’m not referring to the likes of  Sol, Silvestre and Campbell’ older players who are being ‘let go’. It would be great if the next time we sell a player it will be because WE want to  rather than THEY would prefer to play for a ‘bigger’ club.

In yesterday’s post, 26may1989 put it very well when he wrote this about the respective performances in the World Cup ‘Never has a tournament shown the value of team play, of the collective over the individual. To me, that’s a good thing.’

I would argue that team spirit and belief is eroded when the better players know that there are weak links in the side.

We’ve discussed the importance of not damaging player’s confidence by character assassination from the terraces; in the media or on the blogs, but the ruthless objectivity that has got us into this enviable position must also apply to the squad. 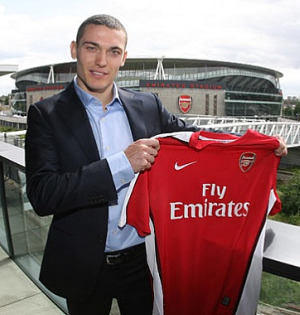 The purchase of Vermaelen to replace Kolo Toure is a perfect example of the way I think we should go about strengthening the squad.

I have it from a ’very reliable source close to the top’ (hell, I sound just like the sort of rumour monger I despise), that last season, there were four first team regulars that were thought not to be up to standard – pretty amazing that we finished 3rd in the Premiership if that really was the case.

I can already sense every reader compiling a list in their heads. Apart from the obvious choice of the keeper, this subject will produce more disagreement than any other. Song would be one of the first names on the team sheet for me whereas I am yet to be convinced that Diaby can produce the consistency and discipline required.

I shall not describe any players in relation to a ‘popular savoury spread’, but suffice to say that we all employ our personal prejudices when evaluating players and sometimes that is an irrational judgement, but the harsh reality is that we can now afford to replace any that are not good enough – and that’s precisely what we must do!

Arsène will no doubt have it in his mind that next season will be make or break for some players. He has announced in previous years that he expects player ‘A’ (Theo?) to really step up a level, he now has the financial clout to replace player ‘A’ if he fails to reach the required standard. Every player with potential should be given the chance to prove they can make the grade (Vela?), but equally there is a point where persistence with failure damages the team and costs games.

We will have a stronger team this coming season. The description of Koscielny as a ‘warrior’ says it all; Arsène knows we need to be stronger and more aggressive to compliment our silky passing skills.

I expect that any player who consistantly fails in terms of ability and work rate will be closest to the door when we go shopping next summer.

This entry was posted on Monday, July 12th, 2010 at 9:30 am and is filed under Uncategorized. You can follow any responses to this entry through the RSS 2.0 feed. You can leave a response, or trackback from your own site.