No Longer The Wonder Of You?

We need a new song to run out to. We have done ever since we moved to the Emirates, in fact I would guess that we have been a much less successful team since the powers that be adopted TWOY (the wonder of you). My guess is that less than 10% of Gooners and none of the team are aroused by this poor example of the King’s work, and surely that is the point of it. 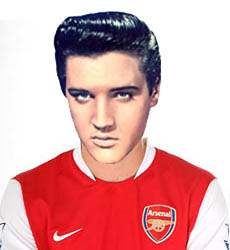 I am imagining the meeting when the new song is chosen ……..

P. Hill Wood would have rejected out of hand anything from the past 20 years. I think he would have chosen a tune with a classical bent, not too highbrow. something traditional with an English theme, Jerusalem would be my bet. And it would be better than what we have at present. 60,000 people singing “And did these feet in ancient times walk upon England’s mountain green” etc. Stirring stuff I feel, though hardly representative of our current squad.

Fizman from the looks of him is more a prog rock. He would be a fan of Free and the driving guitar riff Alright Now could work as could Stone Cold Sober by The Faces, but I see him going for the perennial classic ELP’s Fanfare for the Common Man, a reliable but well trodden path

Gazidis being American would probably look into the great Motown back catalogue and I think he could vote for Martha and the Vandella’s Dancing in the Streets, though perhaps having a blue collar background he would be a Bruce Springsteen man. So the chorus of Born to Run would be my guess for his choice, which would get voted out by the rest of the Board who are unlikely to be Bruce fans.

Mr Wenger is a difficult one. I imagine that he has a cabinet full of Diana Krall CD’s with a few Mozart String Quartets, a bunch of Bach, and the first 3 Sade albums with which to enjoy his red wine . He may well have some early punk/New Wave as well, so a Jam number could fit him – Going Underground or Eton Rifles (actually that works for PHW!), but on reflection he will be aware of the great Arsenal tradition and go with Good Old Arsenal.

Pat Rice would of course suggest some traditional Irish folk. The Scousers having taken the wonderful Fields of Athenry, he could do worse than raid the Dubliners back catalogue and choose The Wild Rover which has the advantage of a clapping chorus. Simple and rousing.

Lady Nina is sure to be a Metalhead. I see her as a huge fan of Metallica and as such The Sandman is an obvious choice, but she would also love the classic metal sound of AC/DC and as such my bet is that she would go for Hell’s Bells or Highway to Hell, both of which in my opinion would be great choices.

As Captain Cesc would have some input, and I think he would check out other sports to see what works…. I recall him going to Twickenham during one of his injury breaks to watch a Calcutta match between England and Scotland. He was sure to have been impressed by the Swing Low Sweet Chariot echoing from the stands and I think he will suggest trying it at THOF. Failing that, he may go for a jumping song like I predict a Riot by the Kaiser Chiefs.

Whatever is chosen, as long as we get rid of TWOY it will be progress. We have suffered this dirge for long enough.

N.B. This article is tongue in cheek and I have no knowledge whatsoever of our Board’s musical tastes. Fun to imagine though!

This entry was posted on Saturday, July 3rd, 2010 at 10:00 am and is filed under Uncategorized. You can follow any responses to this entry through the RSS 2.0 feed. You can leave a response, or trackback from your own site.

131 Responses to No Longer The Wonder Of You?